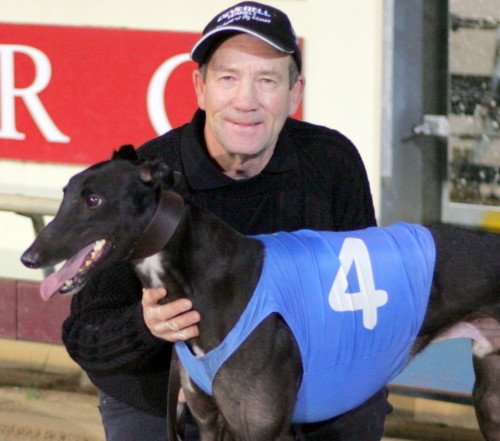 BIG MOOSE’S Hobart Thousand campaign came to an abrupt halt last night when he broke down in the Wally Lake Memorial (461m).

The Butch Deverell-trained dog was in the lead and being hailed the likely winner when he fractured his hock.

He fell back through the field and cleaned up his kennel mate Eagle Eye that was hot on his heels.

The injury has ended his racing career but connections said Big Moose (Collide-Edan Rose) would be given time to recover before embarking on a stud career.

Big Moose, owned and raced by Brian and Justin Crawford, ended his career with 50 wins and 21 minor placings from 86 starts for over $172.322 in stakes to be one of the best performed greyhounds of the modern era.

While Deverell was devastated about the loss of his kennel star his spirits were lifted in the following race when Big Moose’s litter brother Akka Boy made it two wins in the space of four days when her powered home to win a grade three event over 461 metres.

Akka Boy resumed from injury with an impressive all-the-way win in an invitation race in Launceston last Monday week.