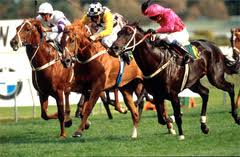 ONE of Australia’s modern day champion racehorses Octagonal last night received the ultimate acknowledgement for his feats on the track when he was inducted into the Australian Racing Hall of Fame.

Octagonal’s induction was celebrated at an official function at the Four Seasons in Sydney where over 300 gathered to celebrate the latest batch of stars to be included into the nation’s gallery of turf stars.

Octagonal, affectionately tagged the “Big O”, was a horse of exceptional ability and courage.

He excelled at two and the following season earned his superstar status, especially after he became the first three-year-old since Red Anchor (1984) to win the Cox Plate and a week later he was the unluckiest of seconds in the Victoria Derby.

Octagonal achieved 14 wins and eight placings from 27 starts, amassing a record $5.8 million in prizemoney. He has been retired to Woodlands Stud and is the sire of another champion performer, Lonhro.

High Caste, was bred in New Zealand in 1936 and initially raced there, High Caste was a horse of remarkable stamina and durability.

After winning four of his first five races in New Zealand, High Caste was sold to Sydney meat tycoon, Harry Tancred and did the rest of his racing in Australia. He won the 1939 VRC Sires’ Produce Stakes at Flemington at his first start for Tancred, followed by wins in the VRC Ascot Vale Stakes and the AJC Champagne Stakes.

When he retired High Caste had raced 71 times for 35 wins and 26 placings. His regular rider, Ted Bartle, said of him: “Every time I asked him for that little extra, which makes the difference between a good horse and a real champion, High Caste produced it”.

Let’s Elope was bred in New Zealand in 1987 and raced there in her early years, Let’s Elope did not blossom until she crossed the Tasman and was put in the care of Bart Cummings.

In the spring of 1991 she won the VRC Turnbull Stakes at Flemington, followed by a last stride win in the Caulfield Cup. Two weeks later she won the weight-for-age VRC Mackinnon Stakes, beating Super Impose, and then went on to win the Melbourne Cup after surviving a protest. Only Rivette, among the mares, had previously won the big Cups double.

In the autumn of 1992 she returned to the track in fine form and won the VATC St. George Stakes and the VRC Australian Cup in record time. Later in the year she ran second in the W.S. Cox Plate, but was relegated to fifth on protest.

Her subsequent international career brought mixed results. In the Japan Cup she ran unsuccessfully and bled. Sent to the United States she won races, but bled again and had to be retired. Her progeny have included Group 1 performer, Ustinov.

Redcraze was a handicapper with the ability to carry huge weights, and a superlative performer at weight-for-age, he was one of the greatest New Zealand thoroughbreds to race in Australia.

During his early racing career, no one could have foreseen the heights to which Redcraze would rise.

He did not race at two, and as a three-year-old managed just two mediocre wins from 14 starts in New Zealand.

At four he showed improved performance with 11 wins in a long season of 22 starts. Already he was showing the toughness and endurance which was to characterise him.

Brought to Australia in the spring of 1955 he soon made his mark in by defeating Rising Fast in the weight-for-age VRC Turnbull Stakes.

After a break in New Zealand he returned for the Brisbane winter carnival where he won the QTC P.J. O’Shea Stakes and the QTC Brisbane Cup

His Caulfield Cup win carrying a record 9 st. 13 lb. (63 kg.) was described as the finest in the history of the race.

Penalised to carry 10 st. 3 lb. (65 kg.) in the Melbourne Cup he ran the race of his life to be caught on the post by the champion mare Evening Peal who was carrying 14 kg. less. During the rest of the season he won a further six races, all at weight-for-age, bringing his total for the year to 11 wins and four placings from 18 starts.

As a hardy seven-year-old, Redcraze was to win two further races including the Cox Plate, bringing his career victories to 32 and making him the then greatest prize winner in Australian racing history.

The rags to riches story of taxi driver, Joe Janiak, and his champion sprinter, Takeover Target, has already become an Australian sporting legend.

Takeover Target was purchased as a yearling for $1,250 by Queanbeyan taxi driver and part-time horse trainer, Joe Janiak.

As a youngster Takeover Target was ruled out of racing for thirty months due to leg and joint injuries, and he did not make his debut until he was a four-year-old.

His trainer’s care and patience were rewarded when Takeover Target won his first seven races including the Group 1 VRC Salinger Stakes at Flemington in October, 2004.

The highpoint of Takeover Target’s career came in 2006 when he won the Group 1 VRC Lightning Stakes and Newmarket Handicap, which resulted in him being invited to compete in the UK at the Royal Ascot meeting in June.

There he won the Group 2 (now Group 1) King’s Stand Stakes and ran third in the Group 1 Golden Jubilee Stakes.

From England he travelled to Japan where he defeated a high class international field in the Group 1 Sprinters’ Stakes.

As a result of his performances in England Takeover Target was classified as the best sprinting horse in the world on turf.

In 2007 Takeover Target added the BTC Doomben 10,000 to his list of trophies, and in 2008 he further enhanced his international standing by winning the Group 1 Kris Flyer International Sprint in Singapore.

Two more Australian Group Ones fell to him in 2009 – the AJC T.J. Smith Handicap and the SAJC The Goodwood.

Takeover Target’s final appearance came in 2009 during his fourth visit to England when he broke down in the July Cup at Newmarket and had to be retired.

His 41 starts had produced 21 wins and 10 placings, with his nine Group 1 wins spread over four countries.

One of Australia’s most colorful and respected horsemen Jim Cassidy and the great Athol Mulley made their way into the jockey category of the hall of fame.

Cassidy made his way to Australia from New Zealand where he had won two apprentice titles and a senior title while still serving his apprenticeship.

He was quick to make his mark in Australia in a state that in that era boasted some of the best riders to ever take to a saddle on Sydney’s metropolitan tracks.

His first Group win in Australia was in 1981 and two years later he partnered Kiwi to victory in the 1983 Melbourne Cup.

He finished fourth on the jockey’s premiership in his first full season 1984-85 when attached to Brian Mayfield-Smith’s Nebo Lodge stable but the following season he won the premiership with his efforts helping Mayfield-Smith to break a 33-year stranglehold the late T.J. Smith had on the trainer’s premiership.

He never won another premiership but his philosophy was simple: “I’m more interested in the quality of the wins than how many winners I ride,” Cassidy was quoted as saying on numerous occasions.

In 1985-86 he notched 28 Group wins and the next two seasons he amassed another 40 that included nearly every feature race on the calendar.

He made a triumphant return to riding after one of his disqualifications in 1997 to partner the great Might And Power to victory in the Caulfield and Melbourne Cups and the next season he teamed up again with Nick Moraitis’ star galloper to win the Cox Plate.

He is still riding in great form and will partner Victoria Derby winner Sangster in today’s AJC Australia Derby at Randwick.

Mulley began his riding career as a scrawny 14-year-old who weighed a mere 24.5 kilograms or three stone and 12 pounds on the old weight scale.

He began his career in the stable of Bayley Paton in 1938 and seven years on he was given a ride that would change his life.

Mulley partnered the great Bernborough to victory in the Villiers Stakes at Randwick in 1945 and the partnership was maintained through 15 consecutive wins, broken by the horse finishing fifth in the 1946 Caulfield Cup, after which Mulley was replaced as the horse’s regular rider.

Over the next two decades Mulley was one of Australia’s foremost riders with multiple wins in the Golden Slipper (3), AJC Derby, Epsom Handicap (2) and three Newmarket Handicaps as well as a Brisbane Cup and a Metropolitan Handicap.

He won his second jockey’s premiership in 1960-61 and seven seasons on he retired from race riding only to make a comeback a year later and kept riding until 1978 when forced out through injury at age 54.

Mulley claimed to have ridden over 2000 winners that included 110 feature events and more than 40 at Group level.

The two trainers inducted were Grahame Heagney and Theo Lewis.

Heagney, a Victorian by birth and a jockey in his younger days, had the distinction of riding the winner of the last race ever held at the old Mentone racecourse.

Heagney moved to South Australia, continued his riding career for a further 10 years until injury forced him out of the saddle, and then took out his trainers’ licence.

In 1961 he got his first stakes winner when Mikadis won the Goodwood Handicap.

He then produced the brilliant two-year-old Proud Miss which won nine successive races in Adelaide and Melbourne before running second in the 1962 Golden Slipper Stakes.

In 1963 came one of the high points of his career when Gatum Gatum ran second in the Caulfield Cup and then took out the Melbourne Cup. In 1963-64 Heagney won the Adelaide trainers’ premiership.

With Tango Miss he won the 1970 VATC 1000 Guineas, the 1971 William Reid Stakes and the 1972 Goodwood Handicap, while Idolou won for him two Futurity Stakes.

In the latter years of his training career he was associated with prominent owner, Felipe Ysmael, for whom he trained many winners

Theo Lewis began his racing career in 1923 as an apprentice with Richard Bradfield at Flemington.

His greatest success as a jockey was his winning of two Williamstown Cups on Second Wind, whom he rode into second place behind Phar Lap in the 1930 Melbourne Cup.

Lewis switched to training in the mid 1930s and won his first race with Lord Carrington in December, 1936.

The following month Lord Carrington won the Geelong Cup, the first of many Cup victories for which Lewis became famous.

His best horse was St Fairy which he trained for owner Ossie Porter, with whom he had a long association. As a trainer of jumpers he also had success, winning the Australian Hurdle with Red Pampas in 1958.

He died of a heart attack in 1962 at the age of 52, one day after being elected President of the Victorian Trainers’ Association.

One of the most popular inductions at the function was that of the late Tommy Woodcock, who made his mark on the training ranks, was best known for his role as strapper to the great Pharlap.

Aaron Treve ‘Tommy’ Woodcock was a Group 1 winning trainer. However, he was nominated in the Associates category due to his role in the promotion of Australian racing whilst strapper of Phar Lap.

Born in 1905, Tommy Woodcock was apprenticed as a jockey at twelve but became a strapper after becoming too tall to continue riding so Phar Lap’s trainer Harry Telford asked Tommy to become “Big Red’s” full time strapper.

On Phar Lap’s trip to America Tommy become the horse’s trainer. Upon returning to Australia he was licensed as a horse trainer where he worked until the age of 78. He prepared Reckless to win the Perth, Adelaide and Brisbane Cups in the one year (1977).

In 1979 Woodcock was awarded an MBE for his services to racing. He died at Yarrawonga in 1985.