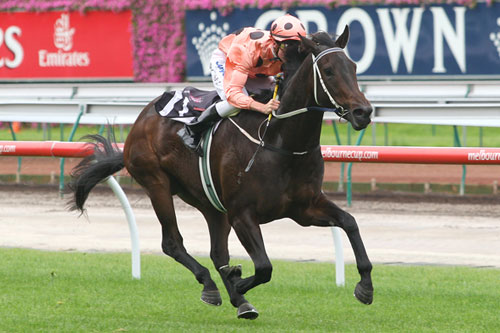 Unbeaten champion Black Caviar’s place in the nation’s sporting history has been officially cemented with her induction this evening into the Australian Racing Hall of Fame.

The Peter Moody-trained superstar, who claimed her 23rd win last Saturday in the renamed Black Caviar Lightning, joins dual Cox Plate heroine Sunline as the only horses to be inducted whilst still racing.

A 13-time Group 1 winner and dual Australian Racehorse of the Year, Black Caviar was one 10 racing greats welcomed into the Hall of Fame at a gala dinner at Melbourne’s Grand Hyatt.

Joining the Victorian-bred and trained champion in the 2013 induction were three racehorses, three associates, two jockeys and a trainer, thus swelling the Hall of Fame’s membership to 142.

In the highlight of the night, inaugural member Carbine, who carried a record 66kg to victory in the 1890 Melbourne Cup, was bestowed racing’s highest honour when elevated to Legend status alongside Phar Lap, Makybe Diva, Bart Cummings, Arthur ‘Scobie’ Breasley and Tommy Smith.

The equines entering the Hall of Fame with Black Caviar were Australia’s most famous jumper Crisp, 1951 Melbourne Cup winner Delta and StarKingdom who sired the first five Golden Slipper winners.

‘Hughie’ Cairns, who in 1926 became the first rider to win the Cox Plate and Melbourne Cup in the one year, and Victoria’s champion apprentice of the late 1950’s, Geoff Lane, were the jockeys inducted.

Bruce McLachlan, a winner of 16 Brisbane training premierships, was the lone trainer inducted, while the three associates were renowned Sydney farrier Albert O’Cass OAM, leading South Australian bloodstock agent and administrator David Coles AM, and the inventor of the totalisator, Sir George Julius.

Rated the world’s best sprinter, Black Caviar has won Group 1 races in four Australian states and grabbed the hearts of two nations with her win in the Diamond Jubilee Stakes at Royal Ascot (UK) in June 2012.

Crisp – Bred and raced by Sir Chester Manifold, Crisp is the first jumper to be inducted into the Hall of Fame. A multiple feature race winner in Australia, he is best remembered for his deeds when campaigning in England including his heroic second in the 1973 Grand National Steeplechase at Aintree (UK) when lumping 24 pounds more than winner Red Rum.

Delta – A star of the late 1940’s and early 50’s, the Maurice McCarten-trained Delta was the second horse ever to win the Victoria Derby and Cox Plate in the same year, doing so in 1949. The blueblood later won the 1951 Melbourne Cup, one of 11 victories he posted from 14 starts as a five-year-old.

Star Kingdom – The imported English sprinter made his mark in Australia as a champion sire in the 1950s and 60s including his remarkable record of siring the first five Golden Slipper winners. The first sire to amass progeny earnings of $2 million, Star Kingdom also ranks as the sire of champion sires like Bletchingly and Marscay, and counts Kingston Town amongst his startling list of descendents.                        Jockeys

Geoff Lane – A former golden boy of Victorian racing, Lane was champion apprentice five times and claimed the 1959/60 senior Melbourne premiership in the year he completed his indentures. Lane won 76 feature races, including the 1961 Cox Plate aboard Dhaulagiri, and enjoyed a wonderful association with the horse dubbed the ‘King of Caulfield’, Lord, winning 17 races together.

Hugh ‘Hughie’ Cairns – The former New Zealand jockey became one of Australia’s great all-rounders competing with distinction in flat and jumps races at the same time. A winner of two Grand National and Australian Hurdles, Cairns became the first jockey to win the Cox Plate and Melbourne Cup in the one year in 1926. He was tragically killed in a race fall at MooneeValley in 1929.

Bruce McLachlan – After a stint as a policeman, McLachlan turned his hand to racehorse training and became a dominant force in Queensland preparing a stream of winners over four decades. At the age of 36, McLachlan won his first Brisbane trainers’ premiership and went on to secure a further 15 titles, with his 78 winners during the 1987-88 season establishing a then record.

Albert O’Cass OAM – From humble beginnings, O’Cass became an icon of Sydney racing as a master farrier and renowned teacher who was influential in establishing a trades course for farriers at TAFE.

President of the NSW Master Farriers Association for 25 years, O’Cass tended many great racehorses during his career and was awarded an Order of Australia Medal in 1999 for his services to the sport.

David Coles AM – A highly regarded leader of the South Australian breeding and racing industries, Coles ran the successful Coles Brothers bloodstock company and was instrumental in fostering international interest in the Australian breeding industry as Bloodstock Manager for Dalgetys. He was for many years a member of the SA Jockey Club Committee and served as its Chairman from 1984 to 1989.