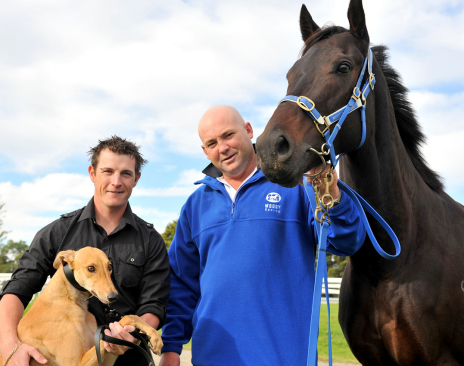 Miata and Black Caviar are the two fastest racing animals in the world, and they recently met at Peter Moody’s Caulfield stables in Melbourne’s South]East.

The question is; which of the two is faster?

Black Caviar’s top speed is 70.1km/h and Australia’s leading greyhound owner, Paul Wheeler, says that Miata – the winner of 13 straight races – has the edge on the nation’s most famous horse.

“It would be fair to assume that Miata could reach speeds of around 75km/h, in a two out race, there wouldn’t be much between them, but Miata would run as fast, if not slightly faster than Black Caviar,” Wheeler said.

Leading Herald Sun racing journalist, Matt Stewart said that trainer of Black Caviar, Peter Moody was in awe of Miata, adding that Moody has a long]standing interest in greyhound racing and currently owns greyhounds with his mates.

“They (greyhounds) are incredible athletes,’’ Moody said in the Herald Sun.

Miata’s career record is; 25 starts for 22 wins. She has never lost when racing over distances greater than 600m and has broken a track record on seven occasions over five distances across Australia, including records over all three distances at Cannington, her home track in Perth.

Owner, trainer and breeder of Miata, Paul Stuart – who hand fed her every three hours as a puppy – said that she has changed his life adding that he has enormous respect for Peter Moody and Black Caviar.

“Meeting Pete and Black Caviar was a once a lifetime opportunity, it was a privilege having the chance to meet the two of them.

“She’s (Miata) a life changing animal, she’s taken me places a normal job will have never got me, and it’s basically like being on a constant holiday with her.

“She is so relaxed, meeting Black Caviar was nothing to her, when we took her home she went straight to sleep,” Stuart said.

Miata has the opportunity to extend her record to 14 straight wins in tonight’s Lizrene Classic at Sandown Park and will return to the track for Australia’s Richest Staying Race the $100,000 to]the]winner RSN Sandown Cup (Heats 17 May/Final 24 May).