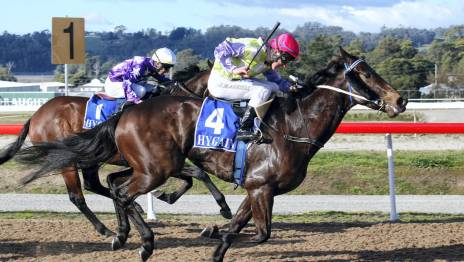 Connections of promising mare Black N Tough will get an early guide to her summer carnival prospects when she steps up to open company for the first time at Devonport on Sunday.

Black N Tough has been impressive winning lower grade races and owner Chris Wickham hopes that, during her next preparation, she will measure up to feature events such as the Bow Mistress and Vamos Stakes.

The S & M Horse Transport Handicap on Sunday is likely to be her last run before a break and she comes up against some handy open-class horses.

Although the four-year-old is still eligible for Class 4 races, Wickham and trainer Leon Wells have been unable to find any suitable targets in that grade, hence their decision to throw her in the deep end.

She will be opposed to several fast, front-running horses and Wickham believes that will suit.

“She’s an honest filly who tries very hard and is better when she can take a sit,” the owner said.

“She likes something to chase _ that’s the way she’s taught to work.”

Wickham said that Black N Tough was similar in that regard to his proven star Rebel Bride who is having a rest before also being set for the rich mares’ races.

Rebel Bride won the Bow Mistress last season before finishing a close third to Lady Lynette and Buzzing Along in the Vamos Stakes.

“Hopefully, we can have both horses ready for those races this season,” Wickham said.