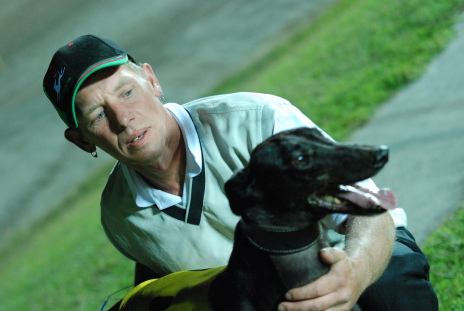 FORMER Victorian dog Black Nitro will win next week’s Easter Plate final with a leg in the air if he can mirror his first effort on the Tattersall’s Park U-bend circuit.

It was a brilliant first look at the track and while he was afforded box one the son of Bombastic Shiraz reeled off sensational splits and posted a best of night 25.86 over the 461-metre trip.

His time made the invitation graders that contested the Easter Cup heats look pedestrian.

Black Nitro flew the lids and was matched early by Sandbanker (7) but when he brushed her off at the top turn it was over bar the shouting.

Black Nitro is owned and trained by Paul Hili who relocated from Victoria recently to set up in the quiet North-Eastern Tasmanian town of Loira.

Aptly named bitch Back Page Lead powered her way into the Easter Plate final for grade five chasers with a courageous victory in a heat.

Back Page Lead began fairly from box five but had to be content with trailing in third spot in the run to the home turn.

Rebel Lee (8) and Franklin Bluboy (1) shared the lead into the home straight but when Rebel Lee shifted up the track it presented Back Page Lead with a saloon passage run and the Wayne Smith-trained bitch took full advantage.

Back Page Lead put the end result beyond doubt within the blink of an eye.

She hit the line 2-1/2 lengths clear of Franklin Bluboy with Rebel Lee a neck astern with the winner clocking a handy 26.31 for the 461-metre trip.

Custodian also looms as a genuine winning chance in the final on he strength of his impressive heat win.

Custodian charged from the boxes wearing the pink vest and had no trouble finding the rail.

Once in front he sped clear and has a decent break at he top turn.

Custodian (Shanlyn Prince-He extended his lead in the run home and hit the line almost nine lengths clear of Hellyeah Taz with the camera unable to split Able Lad and Sherrin’s Choice.

Breeder’s Classic winner Emerald Lee looms as a genuine chance in the final after she produced a personal best effort to win her heat in a time of 26.09sec.

The Debbie Cannan-owned and trained bitch began fairly from box two but she was squeezed out of the battle for the lead and had three ahead of her at the top turn.

But she stalked the trio and when a needle eye opening appeared she darted through the gap and railed up to eventually go on and score by almost three lengths from Octane Vow with Pippi’s Gold over a length astern.

Zavance Man secured his berth in the final with an emphatic two-length win in his heat.

The Ted Medhurst-trained dog kept his unbeaten record on the track intact as he sped over the 461 metres in a handy 26.19 which was his best at the Tattersall’s Park venue.

He showed good early speed from box seven and after a short battle with Lucky Day (2) he forged clear and never going to be beaten.