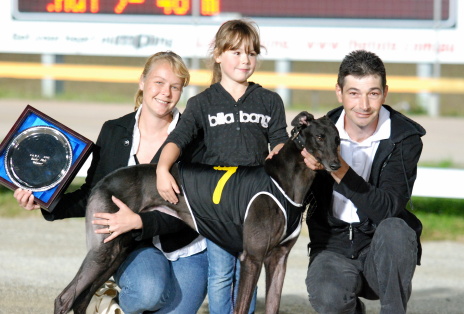 TALENTED young dog Black Nitro has given former Victorian trainer Paul Hili a brilliant start to his training career in Tasmania with a scintillating performance to win the Easter Plate final at Tattersall’s Park in Hobart last week.

Black Nitro showed his worth a week earlier when he blitzed his rivals in an Easter Plate heat clocking a slick 25.86s for the 461-metre trip.

Black Nitro went on to score by five lengths from Tree Bandit with Emerald Lee over a length away third.

Hili and his family, wife Jodie and daughter Olivia, have been in Tasmania about two months.

They purchased a property in the North of the state and they brought about 20 dogs with them of which only four are racing age.

Ï couldn’t be happier with how everything’s panned out since we arrived in Tassie,” Hili said.

“This dog has been going fantastic ever since we arrived so I hope it keeps going,” he said.