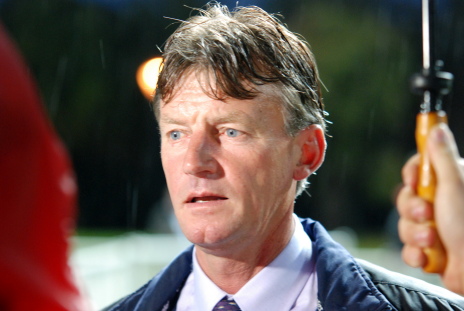 LONGFORD trainer John Blacker could be spending a bit of time in the winner’s circle tonight when night racing resumes for the season at The TOTE Racing Centre in Launceston.

Blacker has runners in all but two of the eight races and all are expected to be very competitive.

In the opening event he will saddle up Scatilla that will be having her third run this preparation and put the writing on the wall with a game fourth last time out in a maiden/class one over 1600m in Hobart just over two weeks ago.

The five-year-old was scratched from last Sunday’s meeting as this looked a better option for the mare.

Blacker expects his lightly raced three-year-old filly Blixt to be mixing it with the best in feature fillies races later this season and she gets her chance to break her maiden status in race two, a maiden over 1400m.

Blixt has had only two starts for an eye-catching effort on debut on the synthetic track at Devonport three weeks ago and she followed up two weeks later with a fast-finishing second in a maiden over 1220m on this track.

She gives the impression the 1400 metres of tonight’s trip will be ideal.

Tsar Of Russia is a first-starter by Court Of Jewels from Santorini Sky, a filly Blacker trained and believed had the ability to go all the way but injury ended her racing career.

The four-year-old mare won a trial at Longford over 700 metres defeating Savour The Fun and while it was the slowest of the four trials the mare was not fully extended to win.

In The Chapel will represent the stable in race five, the Tasfresh Class 1 Hcp over 1200m.

The mare won first up for the stable last preparation and another bold showing is expected tonight at what will be her first outing since July 3 when midfield on a heavy track in Hobart. If there is rain today and tonight then her winning chance will be further enhanced,.

His four-year-old mare Don’t Tell Alex resumes in race seven, a benchmark 68 over 1200m. This mare won two from six last preparation and showed above average ability in each of her two preparations.

If the race is run to suit with good speed on then she could be very hard to beat as she is a recent trial winner on her home track.

In the final race on the program (8) Blacker will saddle up Longway To The Top and with the services of top jockey Stephen Maskiell this mare could send the stable home on a winning note.

It is a very open class two handicap and while she is probably better suited over more ground she has not started for three and a half weeks and has been freshened up for the race.