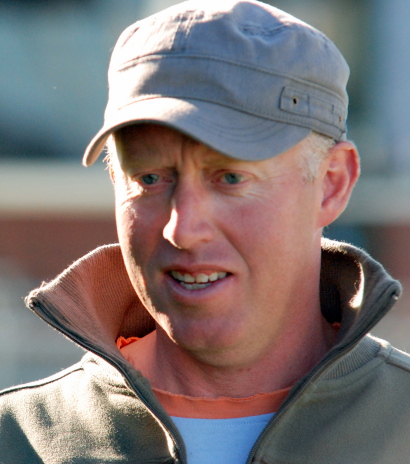 LONGFORD trainer Troy Blacker is taking four of his stable tenants to the races at The TOTE Racing Centre in Launceston tonight of which three are maidens.

But he is hoping two of them are back in their boxes at Birle Lodge at the end of the night boasting wins.

Keukenhof has had only two starts for a minor placing at each outing but the way he ran home last start suggests he would only need an ounce of luck to be the one to beat in the second race on the eight-event card.

Top jockey Brendon McCoull has taken the ride and he should be able to get the gelded son of Helike-Flower Garden (x Scenic) into a handy position early despite having to start from a wide barrier (11).

He steps up from 1100 metres to 1400 metres and that is the key to his winning chances tonight.

“The horse has done well since his last start and I am expecting him to be very competitive tonight over 1400 metres,” Blacker said.

“If he is going to be a Guineas prospect (Tasmanian Guineas 1600m) then I think he needs to show us something tonight and I’m confident that can happen,” he said.

Blacker will saddle up two runners in the opening event on the program, the PDF Management 3YO Maiden Plate over 1100 metres in Bel Ombre (Stephen Maskiell) and Cincinnati Rock (Brendon McCoull).

Bel Ombre debuted two weeks ago with an eye-catching fifth behind the highly promising Light The Candles and was doing his best work at the business end of proceedings after racing greenly in the early and middle stages of a 1220-metre maiden.

“Bel Ombre is only small but he is well put together and has shown above average ability from day one so if he has learned from his debut run and can make the most of his inside barrier (1) then he’s going to be hard to beat,” Blacker said.

Cincinnati Rock debuted in a 2YO race April and finished well down the track after which he was spelled. His first start this preparation produced a similar result but his trainer believes he is a chance with the right run in the race.

“Cincinnati Rock was beaten about six lengths three weeks ago and had no luck but if Brendon (McCoull) can get him into a forward position and with a bit of cover he could be the surprise packet,” he said.

Blacker’s only other runner at the meeting is Beau Vallon that tackles the class two handicap over 1200 metres (race 6).

“I’ve put a claiming apprentice (Rasit Yetimova) on because he rode her well last time and the two kilograms off her back will help,” Blacker said.

“She’s drawn the outside gate so she has to break (the barriers) clean and hopefully have enough speed to find the rail because if she doesn’t and she is left out on a limb her winning chances are diminished greatly,” he said.