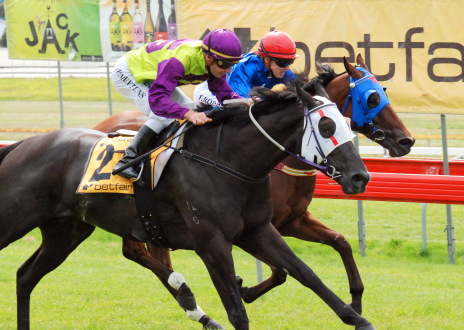 GEEGEES BLACKFLASH confirmed his status as Tasmania’s best galloper when he gunned down a tearaway leader to win the $90,000 weight-for-age Kevin Sharkie Stakes over 1600 metres at Tattersall’s Park in Hobart today.

Geegees Blackflash was aiming for three wins in succession but when the Charlie Goggin and Luella Meaburn-trained Too Many Reds booted five lengths clear at the home turn the task looked too great for “The Flash”.

But when rider Peter Mertens called on Geegees Blackflash for the supreme effort in the home straight the gallant five-year-old knuckled down to his task and grabbed victory in the shadows of the post.

Mertens said it was an even more impressive win than the gelding’s previous victory by four lengths in a weight-for-age race over 1400 metres in Launceston.

“That was a great win because he had to do all the chasing and he got a bad bump nearing the home turn, so to do what he’s done in the home straight today says he’s definitely all class,” Mertens said.

Geegees Blackflash’s trainer John Luttrell said he was confident his horse would win when he got within two lengths of the leader about 150 metres out.

Geegees Blackflash is heading towards the AAMI Hobart and Launceston Cups but Luttrell is undecided whether to give him one more run before the Hobart Cup.

Listen to what trainer John Luttrell had to say about Geegees Blackflash’s latest win.