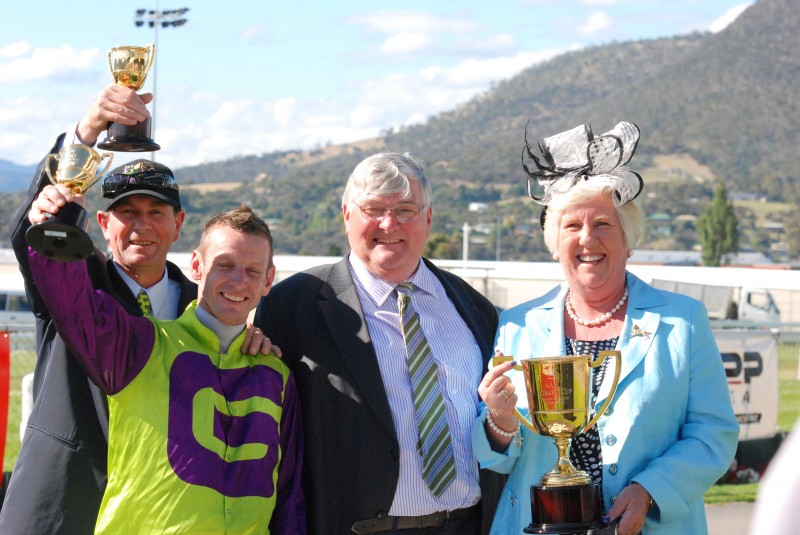 STAR Tasmanian stayer Geegees Blackflash will have to overcome an outside barrier if he is to make it back-to-back wins in the AAMI Hobart Cup at Tattersall’s Park next Sunday.

This year’s race distance has been stretched from 2200m to 2400 metres with the Group 3 event attracting a capacity field of 16.

A $100,000 Tattsbet Cups Double bonus also is on offer this year offering $50,000 each to the owner and trainer of any horse that can win both the Hobart and Launceston cups.

Geegees Blackflash drew barrier 14 at the official barrier draw at Tattersall’s Park today but two of the five interstate invaders also drew poorly with Westsouthwest and Fieldmaster drawing 15 and 16 respectively.

This year’s race boasts a capacity field of 16 of which five are from interstate including the Gai Waterhouse-trained Power Broker that is to be ridden by Stephen Baster who has been riding under contract in Singapore for the past three years.

Power Broker has drawn ideally in gate two while the Darren Weir-trained Hurdy Gurdy Man that ran third in the Terang Cup last Sunday has drawn gate one and will b e ridden by Glen Boss.

The only other interstate invader Lucky Angel from the Tony Vasil stable drew barrier 10.

Another local star The Cleaner drew barrier 11 but it has not fazed either trainer Mick Burles or the horse’s in-form jockey Jason Maskiell who partnered Ollie’s Gold to victory in the Tasmanian Derby last Sunday.

The Troy Blacker-trained Dream Pedlar drew well in barrier three and he will be ridden by Craig Newitt who has been aboard the gelding throughout his Cups preparation.

Paul and Elizabeth Geard who own Geegees Blackflash have three other runners in the race in outsiders Gee Gees Beauty, Gee Gees Boss and Testa Jesta.

Elizabeth Geard was responsible for drawing gates four and five for Testa Jesta and Gee Gees Beauty respectively while Paul drew 13 for Gee Gees Beauty and 14 for Geegees Blackflash so there will be no confusion as to who will be doing the barrier draws for the family in future feature races.