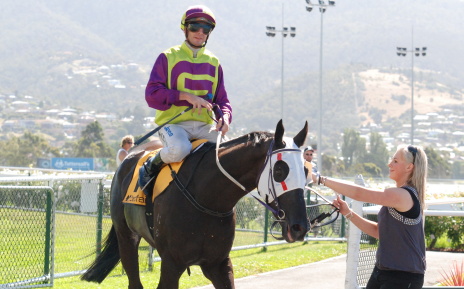 STAR Tasmania stayer Geegees Blackflash confirmed his status as the state’s best galloper and he also firmed as the likely favourite to take out next month’s Group 3 AAMI Hobart Cup.

The John Luttrell-trained five-year-old went into the race undefeated from three outings this season that comprised victories in the Newmarket Handicap (1200m), a weight-for-age triumph over 1400 metres in Launceston and a narrow but game victory in the weight-for-age Kevin Sharkie Stakes over 1600m in Hobart.

But out to a more suitable journey of 2100 metres. the gelded son of Clangalang relished the soft ground to settle midfield before being allowed to stride into the race from the 600-mertre mark without rider Peter Mertens having to release the reins.

When Mertens released the reins at the top of the straight he collared leader Norsqui and gave him windburn as he strolled to the lead.

It was an awesome display from a horse that has taken all before him since recovering from a bleeding attack during a training session three months after he won the 2010 Tasmanian Derby.

“The horse is flying and it comes as no surprise to me what he did to them today,” Luttrell said.

“I’ve just got to look after him and keep him ticking over for a few more weeks and they’ll know he’s about in the Hobart and Launceston Cups,” he said.

The gelding’s owners Paul and Elizabeth Geard found it difficult to contain their emotion after this most recent win.

Listen to what owner Paul Geard had to say about Geegees Blackflash’s latest win – click here .