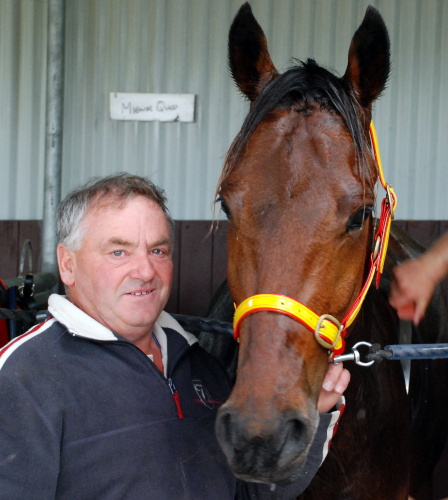 BLOOD DIAMOND was something of an enigma to trainer Rod Ashwood, which is why he gave up on him about a year ago.

Despite having won three races he had given Ashwood too many heartbreaks and disappointments so they parted company.

But in Hobart on Monday night the five-year-old gelding produced a barnstorming finish to score by a big margin in a C0 -C1 over 1609 metres.

He clocked a mile rate of two minutes and some small change (.61) on his way to a comfortable win over George Grant and The Bullionaire.

Trainer Daryl Bates was at a loss to the vast improvement, other than to say the fast pace assisted his cause.

“His work hasn’t changed a bit and other than a minor gear change there was nothing different to what he went around with at his past few starts,” Bates said.

“I reckon it was the fast pace that’s helped him because he was able to get along at his own pace without pulling and he just finished it off really well.”

“If that’s the secret to him then that’s how we’ll try and drive him in the future,” he said.

Driver Ricky Duggan confirmed the fast pace helped his cause.

“They went very hard early and they kept the pace on and that really suited this horse,” Duggan said.

“I was very impressed with how he finished the race off. He was fairly motoring at the end,” he said.

Blood Diamond (Pacific Rocket-Dreamy Jaccka) is owned and raced by Bates in partnership with Ben Rossendell.