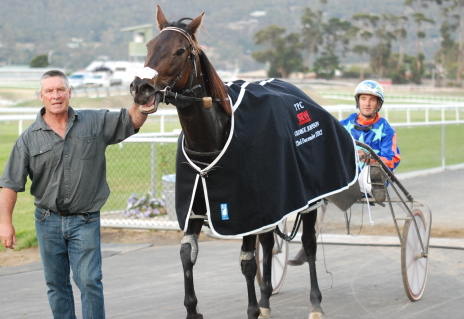 FORMER Tasmanian Oaks winner Blucolla Tigerpie has emerged as one of Australia’s best mares and she proved that in Hobart last night with an emphatic win in the $20,000 George Johnson mares classic over 2090 metres at Tattersall’s Park.

Blucolla Tigerpie was sent charging around the field with just over a lap remaining but so quickly did she sprint she had no trouble hauling in the leaders and crossing to the front in the space of 150 metres.

She held sway to the home turn and when driver-trainer Michael Stanley asked her for the supreme effort she burst clear and hit the line two metres clear of classy Tasmanian mare Benediction with Whosthatchick the same margin away third.

The mare was coming off the back of a win over Benediction in the Shirley Martin Mother Of Pearl in Launceston a week earlier but she also won twice at Melton before making the trip acrossBass Strait.

The Ladyship Mile in Sydney is Blucolla Tigerpie’s main mission this season and given her form against the best mares in Australia she will probably be the favourite when she reaches her main target.