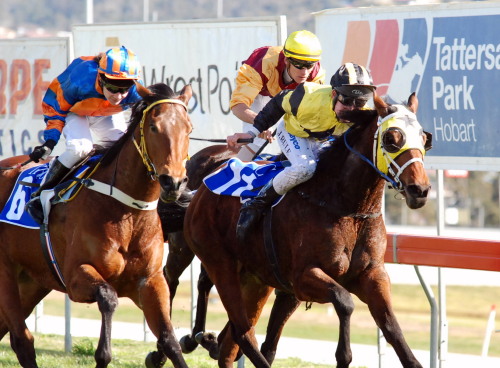 LONGFORD trainer Troy Blacker predicts a bright future for his lightly raced four-year-old mare Blue Light following her impressive win in the Diane Bowerman Maiden over 1100 metres on the Derwent (inside grass) track at Tattersall’s Park in Hobart on Sunday.

With underrated jockey Shannon Brazil aboard, Blue Light settled third and travelled well to the turn before cruising to the leader Left Ear and then matched motors with Remmi Raider at the business end of the race.

The pair hit the line almost in sync but the judge was able to determine a margin in Blue Light’s favour over Remmi Raider with Left Ear a half-length astern.

Blue Light (Lago Delight-Blue Venus) was having only her third start. She debuted with an encouraging third behind Matsangel in the first race held under lights at Mowbray in April, after which Blacker sent her for a spell.

She resumed on August 8 in Hobart with a luckless seventh but on Sunday everything panned out as expected.

It was the second leg of a winning double for Blacker who also prepared Hot Sybil to break her maiden status in the opening race on the nine-event card.