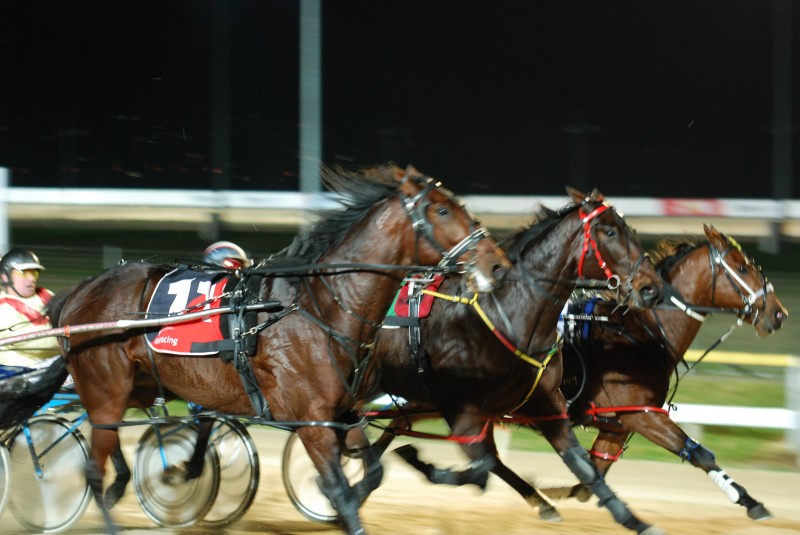 Boasson Hagen (x Art Major) was having only his fourth start but had put the writing on the wall with minor placings in a heat and final of the 2YO Sweepstakes series and he was second to the then undefeated Jerrys Jet in their Dandy Patch heat leading up to this race.

The Christian Salter-trained and driven colt was urged from the pole position to lead while the unbeaten Jerrys Jet raced at his wheel with Mobi Doc enjoying the run of the race on the leader’s back.

Salter ensured a modest tempo through the first half while Jerrys Jet’s driver Ricky Duggan was content to travel comfortably in the “death” until they entered the back straight the last time where he started to apply the pressure to the leader.

When Jerrys Jet drew level in the home straight most were expecting the odds-on favourite ($1.30) to forge to the lead but Boasson Hagen ($4.10) refused to wilt and under strong driving from Salter the colt hit the line a half-head clear.

Mobi Doc ($23.40) ran on gamely to hold onto third and over a metre in advance of Fioki.

Boasson Hagen is owned and raced by Noel and Marlene Salter who bred the colt from their well-performed mare Allsorosie that has produced six foals to race and all have won.

Noel Salter names many of his colts after well-performed professional road racing cyclists and this one is named after Norwegian superstar cyclist Edvald Boasson Hagen who has been a force on the international scene since he turned professional in 2006.