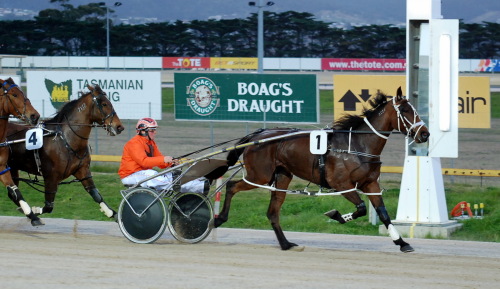 Koizora (Peace Of Art-Sky Love) was having only her second start for Duggan who acquired the four-year-old mare only four weeks ago.

The mare began well from the pole position and once settled in the lead she was allowed t bowl along at a pedestrian tempo with her trainer in the sulky.

She kicked clear turning for home but looked set to be collared by the heavily backed odds-on favourite Artifice (Gareth Rattray) but that mare was unable to get past Duggan’s charge and she hit the line with a short-half head to spare from Atrifice with Rock The Pocket third.

Koizora is owned in Victoria by Betty Lewis who is the mother of top Victorian trainer-driver Lisa Miles.

Listen to what trainer Adrian Duggan had to say about Koizora’s performance in Hobart tonight – click here.