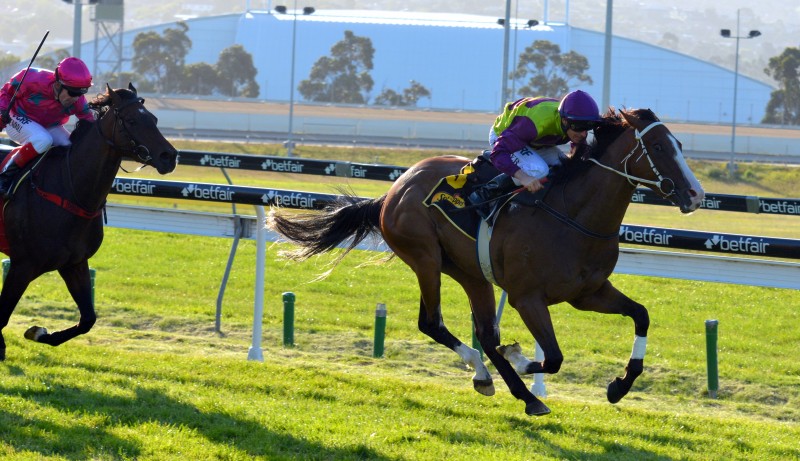 A HORSE that probably should not have lived through a horrific accident as a yearling emerged as a star of the turf by winning the Schweppes Tasmanian Derby over 2200m at Tattersall’s Park in Hobart today.

Geegees Classicboy suffered horrific leg injuries to both back legs as a yearling when he ran through a fence during a freak storm.

The three-year-old gelding was nursed back to health by Stuart and Ruth Gandy who manage Paul and Elizabeth Geards GG Horse Stud where the horse was born and raised.

Today the powerfully built gelding by Wordsmith led for most of the race and proved too strong for his rivals over the concluding stages to score by almost two lengths from Shiralee and Valdez with interstate filly Baja Moon a close-up fourth.

And he did it as a rank outsider with as much as 100/1 offered about him winning with fixed odds bookmakers and he paid $67 on the TOTE.

It was a great training feat by Brighton mentor John Luttrell who was quietly confident going into the race that the gelding would be a serious contender.

“This horse is lucky to be alive let alone winning a Tasmanian Derby,” Luttrell said.

“When I saw this horse after the accident I thought he had no chance of surviving but Stuart and Ruth (Gandy) spent countless hours nursing hi back to health.”

“He was in a cast for four months and to be honest if it hadn’t been for their faith and devotion to getting him back to health we wouldn’t be standing here enjoying this win today,” he said.

Geegees Classicboy had shown ability this season to the point where Luttrell was hailing him as a genuine Derby prospect in October last year.

“This horse has shown me so much in his races and on the training track that I was confident about setting him for the Derby.”

“His trackwork in the two weeks leading up to this race has been great and his trackwork rider Christie Burt said the horse had never felt better after he finished his fast work this week,” he said.

Shiralee was game in defeat and Valdez was doing his best work at the finish so all three placegetters look to have a promising future as stayers.

Baja Moon, the only filly in the field of 13, ran on fairly for fourth and her trainer Patrick Payne said he might keep her in Tasmania to contest the Tasmanian Oaks in Launceston on February 22.