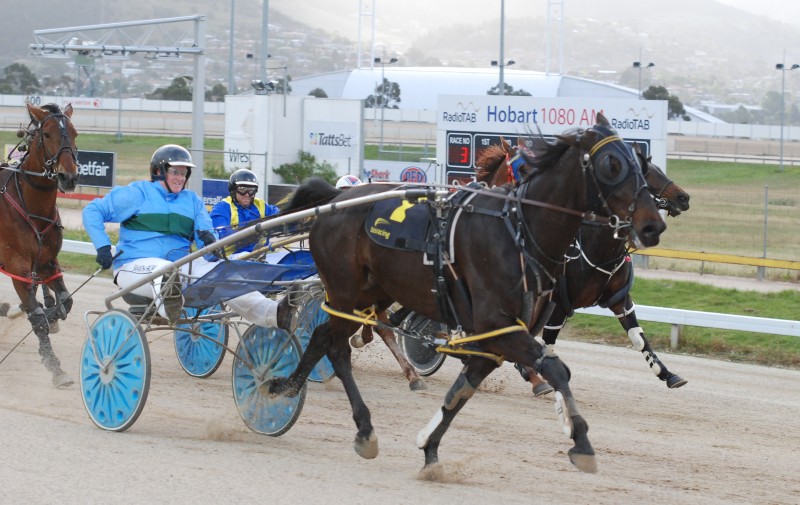 COLEBROOK harness racing trainer Paul Medhurst described his six-year-old gelding Bona Fide Hustler as a “bargain Buy” after he notched his fifth win for connections in a C1-C2 event over 2090 metres at Tattersall’s Park in Hobart tonight (Sunday).

Bona Fide Hustler was purchased by Medhurst for $14,000 from Victorian interests about two years ago and since arriving in Tasmania the gelded son of Red River Hanover has amassed about $35,000 in stakes.

His racing pattern these days is to drop back early and come with a barnstorming finish and that’s exactly what played out in this latest assignment.

With talented novice driver Samantha Freeman aboard, Bona Fide Hustler eased off the gate from the outside barrier (7) and Freeman settled her near the rear of the field in the one-out line with only two behind her.

Frankie Falzoni forged his way to the lead with the favourite Rusty Red Comet facing the breeze and travelling comfortably at the bell.

Driver Matthew Howlett eased his charge Tinkers Taxi out three-wide to make his move entering the back straight the last time and Island Disco (Taylor Ford) latched onto his back.

Freeman was under instructions to bide her time and make her move at the 500-metre peg and that’s exactly what she did.

When they straightened for the run home Freeman got her charge to the outside of the field and the six-year-old gelding rattled home to defeat Rusty Red Comet, that came again after looking beaten turning for home, with Frankie Falzoni hanging on for third ahead of Tinkers Taxi.

Bona Fide Hustler paid $16.90 on the Tote but he was backed in to start at $13 with Tattsbet fixed odds.

Listen to what trainer Paul Medhurst and driver Samantha Freeman had to say about Bona Fide Hustler’s latest win.