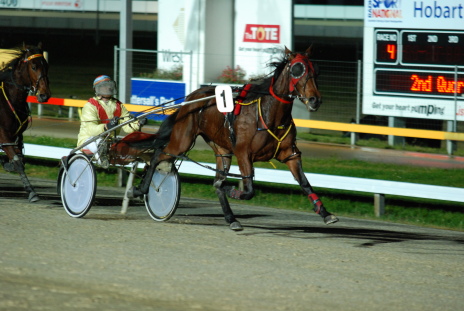 The Tasbred Series is the only free racing and breeding incentive program in Australasia. With over $675,000 distributed annually it provides outstanding value for breeders.

The Tasbred Sires Stakes is a $276,000 race series comprising heats and finals for 2YO, 3YO and 4YO’s. Each age group is divided into two sections – female pacers and male pacers.

Each age group is named after an outstanding Tasmanian horse. The female sections are:

The Tasbred Breeders Coupon is worth approximately $120,000 annually to Tasmanian

Tasbred horses racing as 2YO’s in season 2008/09 were the first crop to be eligible for credits towards the Tasbred Breeders Coupon.

Horses earned an additional 10% of stake money for their breeder which was credited to their Tasbred Breeders Coupon.

2010/11. Credits towards the Tasbred Breeders Coupon relate to all 2YO, 3YO or 4YO Races in

Tasmania as well as any 2YO, 3YO or 4YO Group Races in Australia.

The 10% credit relates to any stake money won. Credits towards the Tasbred Breeders Coupon will be paid in addition to the advertised stake money and are over and above any other bonuses that may be earned.

Credits from the Tasbred Breeders Coupon can only be used by the breeder for payment of service fees or purchases at the Tasmanian Premier Harness Yearling Sale in the following season.

When used for service fees, the credits apply to mare(s) owned or part owned by the breeder and are applicable to the service fee only (excludes agistment fees, vet fees etc).

When used at the Tasmanian Premier Harness Yearling Sale, the credits apply to the purchase of yearlings that are not owned or part owned by the breeder.

A foal born after 1 September 2007 shall be deemed Tasbred if:

1. The mare is served, naturally or artificially, by a stallion registered and standing in Tasmania; or

2. The mare is lawfully inseminated in Tasmania by semen from any registered stallion provided that the resultant foal is born in Tasmania. Clauses 3 and 4 cover other occurrences that may lead to Tasbred eligibility:

3. If an owner decides a mare should leave Tasmania to be served or foal, and the owner wants the resultant foal to be deemed Tasbred eligible, the owner must apply to Tasracing detailing the reasons why.

The application must be made, in writing, at least two months prior to the mare being served to ensure sufficient time to consider the application. If the result of the 42 day test verifies the mare is in foal, the mare or the surrogate mare must return to Tasmania within 30 days for the resultant foal to be considered for Tasbred eligibility.

4. Any exceptional circumstances deemed reasonable by Tasracing may be considered for Tasbred eligibility.

From 1 September 2009, Tasracing will pay all foal registration fees provided that the foal notification is lodged with Racing Services Tasmania within one month of foaling.

No acceptance fees are applicable to any component of the Tasbred Series.