Booth an old hand at greyhounds 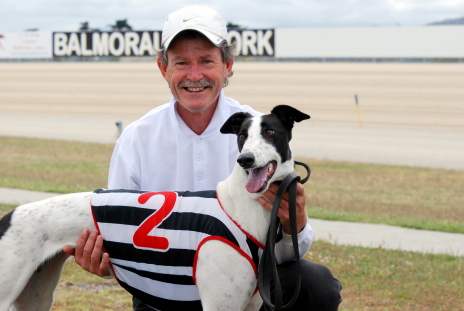 DAVID BOOTH is not a name that has been prominent in Tasmanian greyhound reports over the past decade but his involvement in the industry has not waned.

In Hobart today he trained a winner that might go on and make a name for herself when she gets over longer distances.

Booth prepares Kel Lee (Brett Lee-Premier Class) at his Riverside kennels near Launceston and while it is his first success as a trainer for some time he has been breeding successful litters since the late 1960s.

Kell Lee led all the way to win the Boags Draught Juvenile over 461 metres and while the official time will show she ran 26.19s, there is some doubt as its authenticity.

Nevertheless Kell Lee now has a win to her credit from four starts as well as two minor lacings so she is definitely paying her way.

“I’m confident this bitch might be better when she gets over more ground,” Booth said.

“She is by Brett Lee and he *sire) is starting to have more success as a sire of good broodbitches, so hopefully that will be the case with this bitch,” he said.

Booth began his involvement with greyhound racing in 1970 and trained his first winner, Cormiston Flash, at the old TCA ground in 1971.

“I’ve been in this game a long time. I have only just started getting back into training but I’ve been breeding them all along,” he said

Booth had success with many that he bred but one of the best was Jamella Prince that won the 1999 Silver Chief at Sandown Park in Melbourne.

“David Crosswell took Jamella Prince to Melbourne for us and he won the Silver Chief which was a pretty big deal at the time,” Booth said.

Greyhound racing has been a part of Booth’s life for as long as he can remember.

But he comes from a sporting family that boasts stars in three sports.

“My father Brian, who is 81, played cricket for Tasmania and my sister Maree (Coulson) was a great tennis player who played at Wimbledon, while I have played cricket most of my life,” he said.

Booth stopped training while he nurtured his career as an insurance broker but his workload has decreased to the point where he has been able to renew his acquaintance with training greyhounds.

“I am looking forward to spending more time with the greyhounds and that pleases me greatly,” Booth said.