Boss to ride in premier sprint 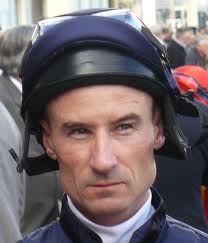 MULTIPLE Group 1-winning jockey Glen Boss has been booked to ride the Brendan McShane-trained Secdolrue in next week’s $90,000 Newmarket Handicap.

McShane confirmed yesterday that Boss had accepted the ride on Secdolrue in Tasmania’s premier sprint race and that he also has been booked to partner the Gary White-trained Gathering Gold in the $60,000 3YO Cup.

Brighton trainer Terry Evans snapped the rider up to partner his two-year-old filly Oxy Angel in the $30,000 Alfa Bowl on the same program.

“We chased Bossy hard and his manager came back to us today to confirm he will ride at the meeting,” McShane said.

“I rate Secdolrue a good chance in the Newmarket despite him not being placed in Hobart last Sunday in the Goodwood Handicap.”

“There were genuine excuses on Sunday (finished last of 10) and it would pay just to forget he ever went around.”

“His form in Launceston is excellent and he will go into the Newmarket at his peak,” McShane said.

Secdolrue has been ridden at his three previous Tasmania outings by talented heavyweight rider Michael Guthrie.

Boss also will ride Secdolrue’s stablemates Secuma in the Premium class one over 1200m and Centenary Diamond in the 0-75 handicap over 1600m.

Hyland took Chairmanoftheboard to Adelaide last Saturday for a restricted sprint over 1200m but he failed to flatter.

“When I nominated for the race I didn’t realise it was going to be run on the Morphetville Park track (inside grass) and that was just too tight for this horse,” Hyland said.

“If he travels back well from Adelaide then we’ll most likely come across for the Newmarket,” he said.

Chairmanoftheboard was beaten by the narrowest of margins in last season’s thetote.com.au Weight-for-age stakes (1200m) in Launceston by the Gary White-trained Twenty Grand.