Brave Mukky does it again 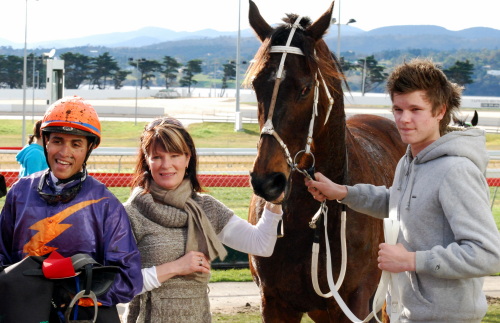 THE prospects of rain affected tracks in the coming weeks poses no problem for talented middle distance galloper Brave Mukky given the way he treated his rivals in the Betfair Handicap over 1550m at Tattersall’s Park in Hobart on Sunday.

It was a similar effort to his previous effort that produced an all-the-way win in a benchmark 78 handicap over the same journey on July 03.

The Vicki Rhind-trained gelding was allowed to settle third by stable apprentice Johnny Luxe while Gea Force and Farasi engaged in a speed battle for the first half of the race.

Brave Mukky moved alongside the leaders nearing the home turn and when Luxe gave the five-year-old his head he kicked clear and was never seriously threatened and went on to score comfortably from Heartbreak Kid and Gea Force.

Rhind said the gelding would be aimed at similar type races in the coming weeks.

Listen to what trainer Vicki Rhind had to say about Brave Mukky’s latest win – click here .