Brazil doubles up at Spreyton 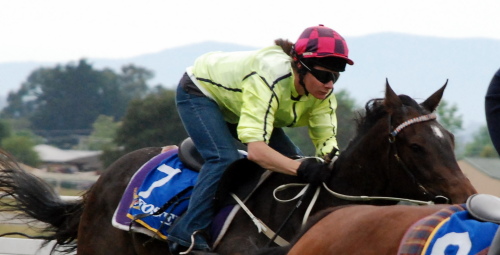 TALENTED jockey Shannon Brazil returned to form with two winners at the first night meeting of the season in Launceston last Thursday night and she continued on her winning way at Spreyton on Sunday where she claimed another double.

Brazil guided Snake Dancer and Mr Fashion to victory in Launceston and on Sunday for her first double and she partnered Actuality and Teller to convincing wins on the Spreyton layout.

Actuality is trainer by her father Peter Brazil who is campaigning two horses in Tasmania. The other one, Zilzaal, started favourite to win the last race on the card in Launceston last Thursday night but had to settle for second to Lucidly.

On Sunday Actuality went around at good odds despite having been placed third at her first start in the state.

The trainer said Actuality was leased specifically to race in Tasmania.

“I leased Actuality to race here (Tasmania) because she is a good wet tracker,” the trainer said.

“She ran a good second at Mornington on debut and followed up with a win at Ballarat but then her form fell away.”

“She hadn’t raced for six months when I got her,” he said.

Actuality is not the prettiest horses to grace our turf but she doles possess above average ability.

“This mare is an ugly, sour thing that will kick and bite at will but she has a lot of heart on the track,” he said.

“I think she has the potential to go right through her classes but if she can’t handle the tracks when they dry out, I’ll spell her and bring her back next winter,” the trainer said.

Shannon allowed Actuality to settle midfield and kept persevering for rails runs until the home turn where she burst clear and went on to score by over three lengths from outsider Riprova with Dangerous Gee Gee a close-up third.