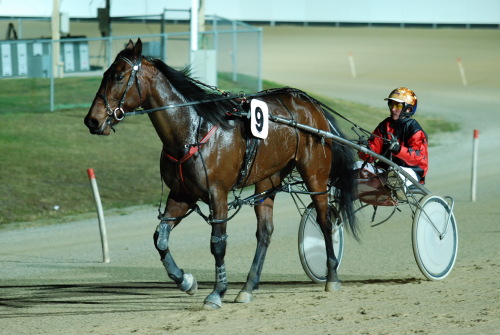 A HANDFUL of Tasmania’s best two-year-old pacers will contest heats of the Breeders Crown series at The TOTE Racing Centre in Launceston on Sunday night.

While the colts and geldings’ heat consists of only two runners and the fillies event has only four, the series is crucial to owners and trainers who have youngsters paid up for the national event.

It is a Victorian-based series and all prize money for the Tasmanian heats is funded by Harness Racing Victoria.

Breeders Crown heat winner in every state qualify for a berth in the next stage of heats in Victoria, which progress to semi-f0inals and ultimately finals for each sex.

Quastor Centurion, arguably Tasmania’s best male two-year-old, will line up in race one on the 10-event card on Sunday night and his only opponent is his Karalta Wizard that finished sixth to Quastor Centurion in the Dandy Patch (sires stakes) final in Hobart last Sunday night, beaten about 10 metres.

Benediction is quoted at $1.40 in early markets and given the exposed form of her opposition the early market appears an accurate guide.

.The balance of the program should produce some keen contests.

The Musics Over faces open company for the first time but this Melissa Maine-trained and driven six-year-old has won four and been placed as many times from his past eight starts with Maine calling the shots.

Maine has always shown promise as a driver and trainer but in recent months she has burst into the spotlight courtesy of some brilliant drives and the way her horses have maintained consistency is testament to her ability as a trainer.

The Musics Over will line up in the Bullock Discretionary (race 8) that is a standing start event over 2200 metres.

The gelding will start off the front row with his main opposition likely to come from the two back markers, Cosmic Under Fire and Yushchenko Leis that both start off 20 metres but have good form in this class.

Former smart two and three-year-old Majestic Emperor lost all form when transferred to Victoria but he’s back on home soil and in the care of astute trainer Rod Plunkett.

The six-year-old gelding ran third at his most recent outing behind Ronnie Rat and Redside Shrek in Hobart two weeks ago so he only needs to have improved slightly on that effort to be competitive here.