Bro Town back in winner’s circle 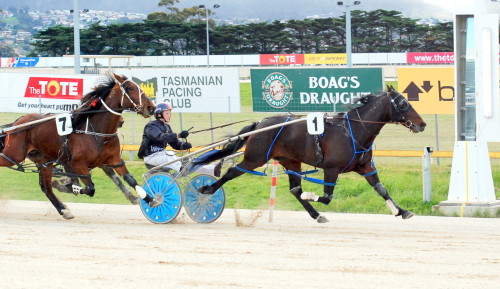 LIGHTLY raced five-year-old pacer Bro Town returned to form with an impressive all-the-way win in the Betfair Pace (C0) over 2090 metres at Tattersall’s Park in Hobart on Sunday night.

With talented young driver Mark Yole in the sulky, Bro Town showed good gate speed to lead and when let down at the top of the home straight the last time he forged clear and went on to score comfortably over It’s a Hoot, that faced the breeze throughout, with Line The Pocket a close-up third.

It was his second run back from a spell but one that suggested there are more wins in store for the Paul Medhurst-trained stallion.

“He’s got good early speed and he was able to use that to his advantage tonight,” Medhurst said.

“He’s been a good earner for his owners and he’s hardly missed a cheque since he arrived in my stables,” he said.

The entire won two and was placed six times last season but he had to be sent for a spell when he contracted a virus.

“We had his bloods done and that revealed all wasn’t well with the horse. He had a bit of a virus so we tipped him out for a spell,” Medhurst said.

Bro Town (DreamAway-NuclearTown) is owned and raced by Tony Pacey and Gail Medhurst. The gelding was bred in New Zealand and raced for a short time in Victoria before arriving at Medhurst’s stables at Colebrook.

Listen to what reinsman Mark Yole had to say about Bro Town’s performance on Sunday night – click here.