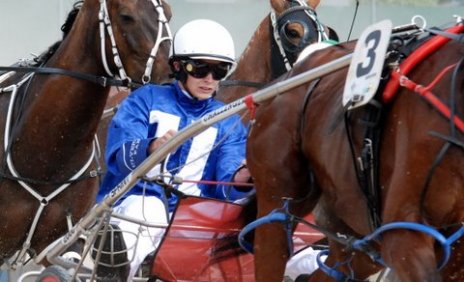 Claiming Novice Driver Nicholas Brockman was the star performer at the Tattersall’s Park, Hobart harness meeting on Sunday night (21 August). The 18 year old Brighton reinsman had four drives and finished the night with three winners and a third.

Brockman has been licenced for a mere nine months and has already driven 11 winners. His treble on Sunday night was the first time he has achieved multiple winners at a race meeting.

Brockman’s haul commenced with a double for Colebrook trainer Paul Medhurst, who utilised Brockman’s claim to find easier races for Weemalanews and Lockdown.

Weemalanews ($43.60) is a talented but unreliable seven year old mare who was on her best behaviour for Brockman. She settled midfield from a second line draw and was put into the three wide line at the 600 metre mark before Brockman launched her to victory with a sharp sprint in the home stretch.

Brockman was having his first drive on Weemalanews but he had done his homework. “She can be a bit touchy in the mouth and if you ease her back gently she is fine. Paul told me not to pull out until the home straight and when I did, she sprinted hard,” said Brockman.

Lockdown ($3.50) was ideally placed in a C1 race. His previous run was fourth beaten 1.5 metres in a C3/C4 after which he was reassessed as a C2 due to no wins for the previous ten starts. Brockman’s claim allowed Lockdown the luxury of competing in the C1 race. Lockdown began well from the mobile and raced outside the leader until the home straight and easily held the challengers at bay in the run to the line.

Brockman’s two drives for Bagdad trainer Paul Williams comprised a favourite and a despised outsider. Top Memories ($70.80) was given a perfect trip behind the leader before Brockman eased off the fence and challenged in the straight. For a fleeting moment it looked like Top Memories may grab the leader Melman ($3.90), but the run finished 100 metres out and Top Memories plugged into third place.

Brockman completed his Sunday night treble with his favourite horse Our Sir Lew to complete his fourth win on the five year old gelding. Our Sir Lew led from barrier one and always had the race in his keeping with a 58.2 last half for a 2:00:0 mile rate for the 2090 metres.

Brockman is quickly gaining a strong following amongst trainers who are starting to appreciate his skill and dedication. The apprentice farrier is a genuine light weight and a quick learner who should continue to be a regular in the winners circle while he can use his concession claim.