Bruce has eyes on major prize 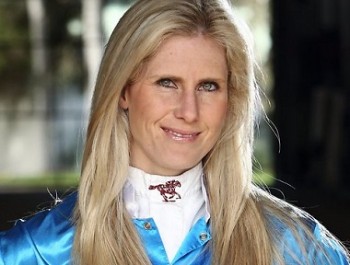 CASEY Bruce is more than just a pretty face.

While the jockey might not have had the success as some of her peers, she’s highly respected behind the scenes.

You only have to ask Robert Smerdon, who rates Bruce as one of his best workers.

“I’ve got a great relationship with Robert … I’ve been working for him for about nine years,” Bruce told Melbourne Racing.

“He doesn’t say much, but you learn an awful lot.”

Riding for Aquanita has given Bruce the opportunity to see and ride some top notch racehorses.

“I generally get put on more stayers than sprinters,” she said.

“But I’ve had the privilege to ride two outstanding jumps horses in Black and Bent and Some are Bent.”

Bruce understands the pecking order though.

When she’s riding jumpers in flat races, her job is to get the miles in their legs ahead of a campaign over the sticks.

But she’s managed to still eke out wins.

Her record on Brungle Cry, one of Smerdon’s best hurdlers, is outstanding.

“I’ve ridden him three times on the flat for two wins, which is amazing,” she said.

Asked if she had ever considered getting her ticket to ride in jumps races, Bruce was sheepish.

“I have considered it, but mum and dad would have a heart attack,” she said.

“I would like to be like Patrick Payne though and have one crack at it and then walk away.”

Bruce, who grew up at Woodend in the MacedonRanges, was an equestrian champion in her teenage years before starting her apprenticeship.

He only had half a dozen horses in work at any given time – so it was inevitable that Bruce would later move on – but the jockey said she learnt plenty in her three-year stint with Corrigan.

“He had a horse called Hywel Legend that was no superstar, but was pretty competitive whenever he went to town,” she said.

“He was a difficult horse to ride and he only seemed to run for me and not the boys.

“At one stage he was being set for a Sydney Cup preparation, but that didn’t work out.”

Bruce left to ride for Graeme Rogerson in Melbourne, but opportunities were few and far between.

“Being female too, it was pretty tough.”

Bruce was adamant that if she was able to comfortably ride at 52kg then she would have got a lot more rides.

“The feedback from trainers was encouraging, but when you have a woman’s body like mine – I’m 5’ 7’’ and curvy – it’s hard to keep your weight down.”

While Bruce was struggling to get opportunities, she was busy manning the phone for her new husband, Brad Rawiller.

“I used to manage his rides and he won premierships, so that was quite satisfying. Both of us had a strong work ethic,” she said.

“The break up was difficult for both of us, but we both just put our heads down and bum up.

“We had to see each other almost every day at the races, but we didn’t care.

“We are still good friends and he’s got a new partner and a daughter now, so I’m really happy for him.”

Now 32, Bruce has found her niche in the racing industry.

She works full-time for Smerdon and rides freelance around the state, taking as many rides as she can.

Her new manager Warren Conroy has her riding in Tasmania virtually every week and trips to the winners’ stall and now more frequent.

She’s never ridden a winner in a major race – not even a country cup – although she’s known by locals at the King Island Queen.

“I’ve been riding at KingIsland for years and I’ve won every race on the island except the cup,” she said.

“I’ve been the leading rider there five times, but I always seem to finish second in the cup.”

When she decides to hang up the riding boots, most likely to be a mother, Bruce knows she’ll have work inside the racing industry.

Over the years she’s managed being a jockey and a compere at racing events.

Being good looking has had its positive and negative impacts, Bruce said.

“Early in my career they used to judge me by my looks and not take me seriously,” she said.

“I think I was the only person to wear makeup to the races.

“But when they got to know me they saw that I was just another girl.

“The positive has been that I’ve been able to do a lot of media and compere work because of my looks.”