Bruntons fire with another treble 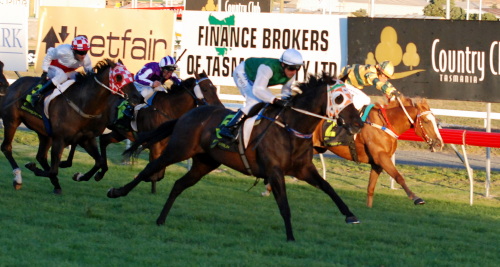 ANOTHER training treble at The TOTE Racing Centre in Launceston last night has given reigning premier combination of David and Scott Brunton a healthy lead in the race for this season’s premiership.

Team Brunton won with two-year-old filly Cambalara, Cool Heat in the class six handicap and the consistent Hexy Legs in the final event on the eight-race card.

Cambalara made it look easy when she strolled to a 4-1/2 length win over Skip To The Moon and Head Spinner in the Veolia Environmental Services 2YO Maiden over 1100 metres.

With Brendon McCoull in the saddle, Cambalara (Magic Albert-Tambalara) led and despite being attacked in the lead from the 600m to the top of the home straight she made light of the task and scooted clear over the final 200 metres.

McCoull said the filly had improved with each outing and he expects her to develop into a nice three-year-old.

“There’s no doubt this filly has improved with each run and tonight she was very professional in the way she went about winning,” McCoull said.

The six-year-old mare settled just worse than midfield and when jockey Brendon McCoull called on her for the supreme effort she delivered the knockout blow to her rivals.

While Cambalara and Cool Heat were impressive, the star of the Brinton treble was Hexy Legs that was attempting to make it four wins in succession.

She drifted in the market from $2.00 to $2.40 when solid money came for the top weight Mystery Quest but those who backed Brunton’s former Victorian mare never had cause for alarm.

With David Pires aboard, Hexy Legs cruised to the front and set a solid pace with Mystery Quest content to track her and then camp outside her from the 600m to the home turn.

But when Pires asked Hexy Legs to extend in the home straight she responded magnificently and went on to defeat Trysty by almost a length with Two Bob almost two lengths astern.

The treble took the Bruntons to 54 wins for the season and 25-1/2 wins clear of Gary White and Charlie Goggin whom have both prepared 28-1/2 winners.