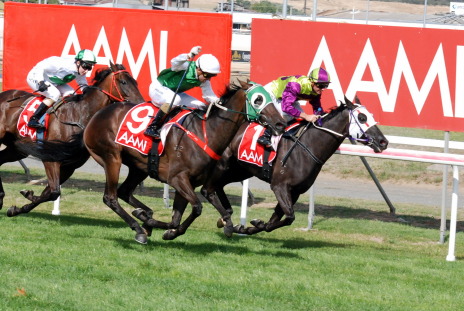 TASMANIA’S premier training combination of David and Scott Brunton celebrated one of their greatest victories today when their lightly raced five-year-old Prevailing scored a narrow but game win in the $225,000 Group 3 AAMI Launceston Cup over 2400 metres at The TOTE Racing Centre.

It was a case of the inexperienced novice going up against Tasmania’s proven star in Geegees Blackflash and it was the underling that emerged triumphant in the last few strides.

Luttrell’s stable star ($3.90) was one of the favourites along with Fieldmaster ($3.40) and the heavily backed Dream Flyer ($4.50) and when Geegees Blackflash (Peter Mertens) kicked clear at the top of the home straight the crowd roared with expectations of a mirror image of the Hobart Cup.

But under the big weight of 60kg Geegees Blackflash was unable to fight off the lighter weighted rising star (54kg) and conceded the race to the Brunton-trained gelding by a neck.

It was an emotional Scott Brunton who charged to the unsaddling enclosure and delivered a bear hug on his brother Stuart that would probably have crushed a lesser man.

“This is what it’s all about,” Brunton said.

“We came to this race last year and had to settle for second (with White Yard) and for a minute there I thought the great horse (Geegees Blackflash) was going to deny us again.”

“But our horse kept coming and got the result,” he said.

Scott then delivered a gentle hug to his mother Julie Brunton who is a part-owner of Prevailing (Secret Savings-Amulet).

The five-year-old was once considered a horse that might win a couple of lower grade races but in the past 12 months he has been a work in progress for the Bruntons who maintained all along that he had staying potential.

It also was a great result for Victorian jockey Anthony Darmanin who has made Tasmania his second home this past year.

Listen to what jockey Anthony Darmanin had to say about his Launceston Cup win aboard Prevailing – click here .