Buckle Up Wes named 2014 Greyhound of the Year 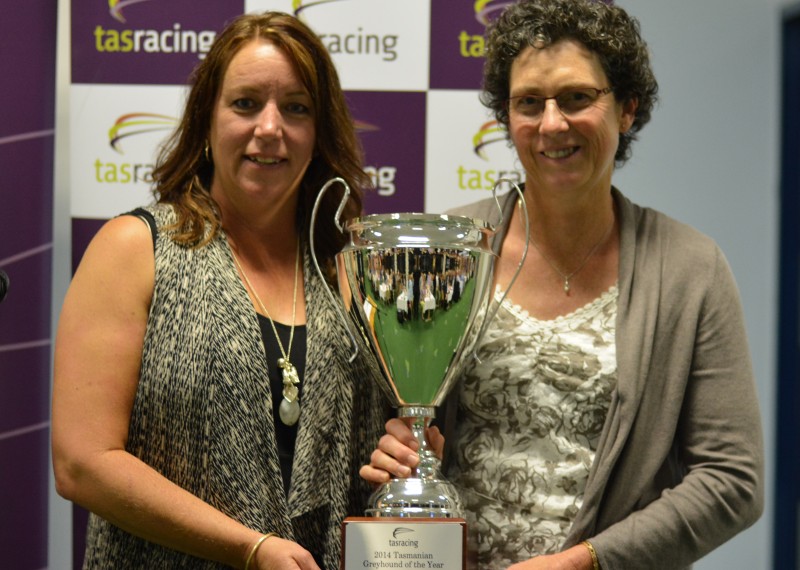 CHAMPION greyhound Buckle Up Wes was rewarded for his efforts last year when he was named 2014 Tasmanian Greyhound of the Year.

The announcement was made in front of a packed house at the Launceston Cup-Annual Awards presentation dinner at The TOTE Racing Centre in Launceston which was hosted by the Launceston Greyhound Racing Club.

Buckle Up Wes was a unanimous choice of the five judges who adjudicate on the Greyhound of the Year.

The Ted Medhurst-trained dog started 26 times in 2014 for 15 wins and seven minor placings with his two biggest victories coming in the Group 1 Australian Cup and the Group 1 Top Gun, both of which were held at The Meadows in Victoria.

Wes also won a State heat and final of the National Sprint Championship but was denied the chance to represent Tasmania because of an injury he suffered in winning the state final.

He won a heat of the richest greyhound race in Australia the Golden Easter Egg at Wentworth Park in Sydney and ran second in the semi-final to earn a berth in the final in which he finished a game third.

The dog suffered a serious injury that took him away from racing for over two months but he was till invited to contest the Top Gun and Medhurst proved yet again what a great trainer he is by preparing his kennel start to win that race first-up from a 100-weel break.

Buckle Up Wes was retired recently as a result of a serious injury suffered during a heat of the Group 1 Paws of Thunder.

Before a packed house at last night’s presentation dinner, Buckle Up Wes’ owners Robyn Johnson and Sharon Sutton stepped to the podium to accept the trophy for Wes’ popular win.

Buckle Up Wes has retired to stud and will stand at Ted Medhurst’s kennels at Mangalore.

The dog retires with impressive statistics of 30 wins and 13 minor placings from 53 starts for prize money of just over $550,000 which is a record for a Tasmanian-bred and owned greyhound.

Listen to what Robyn Johnson and Sharon Sutton had to say about Buckle Up Wes being named Tasmanian Greyhound of the Year for 2014.