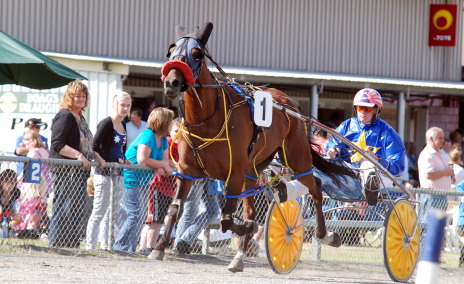 TOUCHWOOD BUCKSTA was dubbed King of the country cups when he scored a narrow win in the $8000 Carrick Cup over 2650 metres at Carrick Park Paceway yesterday (Saturday).

It was the eight-year-old’s third country cup triumph, having already been successful in the New Norfolk Cup on Australia Day and the Burnie Cup last weekend.

The horse’s trained Clinton Woods was ecstatic after the race.

“This is a real bonus,” Woods said.

“We weren’t sure early in the week whether we’d run him because he missed a lot of work leading into the Burnie Cup after getting an abscess in his foot and we weren’t sure how he would get over that race.”

“But, he pulled up well, he seemed bright and he was eating well so we decided to give it (Carrick Cup) a go,” he said.

Touchwood Bucksta was given the run of the race by driver David Medhurst, who handed up the lead to take a sit and when he gained clear racing room at the top of the straight he forged clear and held on to defeat In cruise Mode by a narrow margin with Wingsofaneagle a closing third.

It was Touchwood Bucksta’s sixth win from his past seven starts.

The gelding is owned and raced by his trainer along with his father Peter, mother Christine, wife Emma, sister Summer Howorka and her husband Lyndon Howorka.

While it was a marvellous performance to notch his third country cup, the run of the race came from Saab Quality that lost about 80 metres at the start but rattled home to finish fifth and on the heels of the placegetters.