Bundaleda shows up on debut 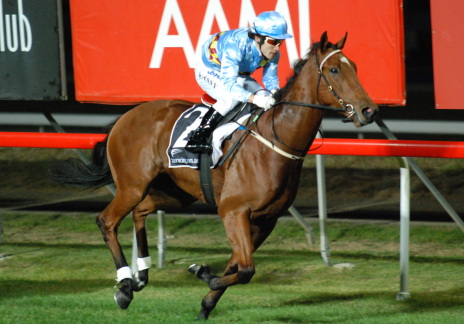 SPREYTON trainer David Miller has only a handful of horses in work at any one time but he usually has one that ensures the larder is well stocked.

In Launceston on Wednesday night he unveiled his latest potential high flyer that goes by the name of Bundaleda, a powerfully-built two-year-old that gave his rivals a galloping lesson on debut.

Bundaleda (x Azevedo) was bred by Miller from his former handy filly Alijacque that placed in Listed company as a juvenile.

It was a very impressive performance from a youngster that looks more like a fully developed four-year-old.

He has an imposing physique, standing 16.2 hands high and weighs in at about 530 kilograms.

“He is a big horse with tons of ability – it’s a good combination,” Miller said.

With Yassy Nishitani in the saddle, Bundaleda began brilliantly from the gates and had no trouble leading the field. When Nishitani gave his charge an inch more rein turning for home the gelding forged well clear and on the line had a comfortable 1-1/4 length margin on Wise Investment with the well-backed Kaluhiokalani an eye-catching third but 3-1/2 lengths astern.

Miller said he was unsure if the gelding would progress to the Sires Produce Stakes over 1400 metres in Launceston but hinted it was a distinct possibility if he comes through his debut run unscathed.

The Sires Produce Stakes will be held in Launceston on May 12, which is a Saturday with the entire meeting to be broadcast on Sky2.