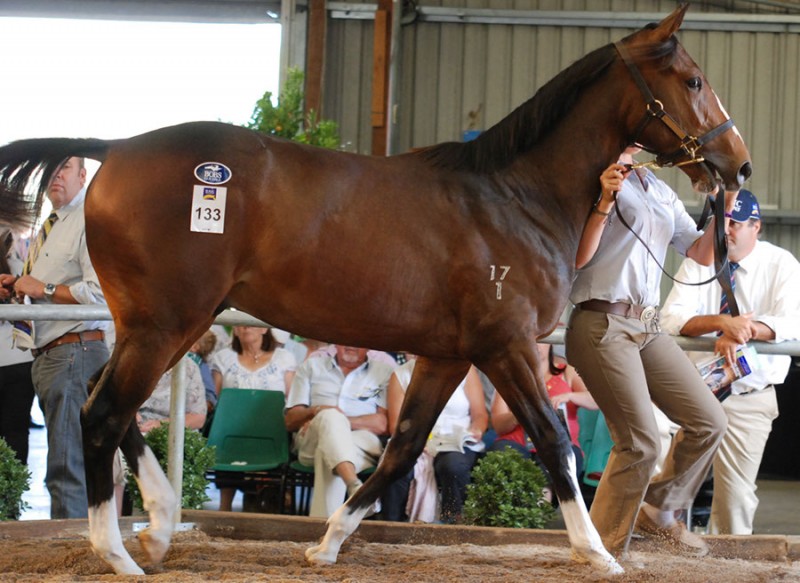 A COLT that was sold at the 2013 Tasmanian Magic Millions Yearling Sale and delivered $22,500 to the Salvation Army’s Dunalley Bushfire Appeal fund is primed to notch his maiden win on his home track at Spreyton today.

Sentinel (All American-Whitemore Dynasty) was sold at the sale to Denise Martin for $45,000 and the breeder Alwyn Shaw from Aceland Stud kindly donated half the proceeds to the bushfire appeal that was instigated by the Salvation Army to help those affected by the bushfires that tore through the town of Dunalley on the Tasmanian Peninsula and surrounding areas in January 2013.

Sentinel has matured into a striking individual and showed enough on debut two weeks ago at Spreyton in finishing fourth to suggest he may have a bright future.

The gelding will strip much fitter for his debut effort which resulted in a fourth over 1150 metres at Spreyton two weeks ago.

He settled back in the field with Brendon McCoull aboard and while a little wayward on the home turn he ran home strongly to finish on the heels of the placegetters.

McCoull retains the ride today and a better barrier draw (5) compared to his outside gate on debut will also enhance his chances of breaking his maiden status.

His main danger appears to be Divine Archer from the Mark Ganderton stable that produced an encouraging forth last start behind the highly promising Kentucky Bound that will be attempting to keep his unbeaten record intact in race five,  a class one handicap over 1150 metres.