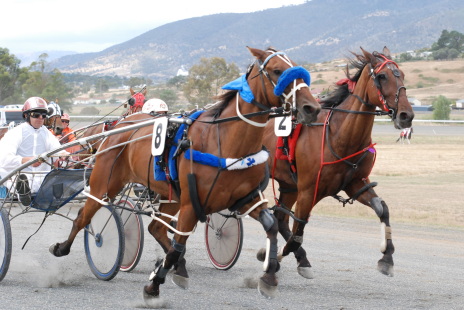 DYSART harness racing trainer Marc Butler has only one horse in his care these days and at New Norfolk today (Thursday) his sole stable tenant Thelastof scored a game win in the Don & Betty Knight Stakes over 2100 metres.

Thelastof ($4.40) faced the breeze for most of the journey but made light of the task as he forged clear close to home to hit the line a metre clear of race leader and favourite Bush Tucker ($3) with the luckless Apple ($5.450) a closing third three metres away.

It was Thelastof’s first win from 10 starts but it was only his second start for Butler who acquired the gelding about two months ago.

Thelastof (Holmes Hanover-Delightful Emm NZ) showed decent gate speed but he was allowed to drift back by driver Ricky Duggan who had a pre-race plan to get to the outside and send him around the field to park in the breeze, which is exactly how the race panned out.

“The horse has done a good job and at least it has given the owners at least one photo on the wall,” Duggan said.

“He did a good job to park in the death and then forge clear when it counted,” he said.

Listen to what trainer Marc Butler had to say about Thelastof’s first win – click here.