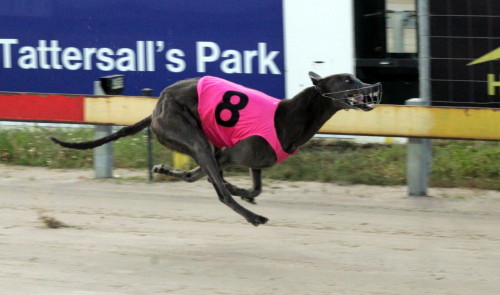 FORMER smart sprinter Little Marsh made quite an impact in her racing days and now she looks set to remain in the spotlight as a broodbitch.

In Hobart last night her son Butterworth (x Surf Lorian) broke the 340-metre track record when he powered his way to an impressive win in the The Mercury Juvenile.

Little Marsh held the juvenile 457-metre track record at the old Royal Showground track at her peak and was regarded as one of the fastest bitches to grace the showground circuit.

Butterworth is raced by the Island Syndicate that also raced his mother.

The syndicate is managed by Glenn Butterworth, after who this dog is named.

Given his early brilliance the dog looks set for a bright future.

He is prepared at Longford by veteran trainer David Crosswell.

It was only Butterworth’s third start with his record standing at two wins and a fourth.

He should soon travel back to Devonport to win his juvenile on that circuit before working on wining his grade fives at all tracks.