Buzzing Along resumes in style 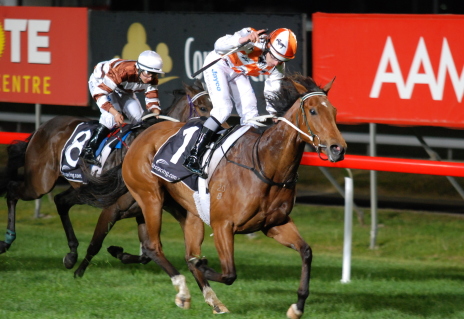 STAR four-year-old mare Buzzing Along kicked off her 2012-13 campaign with an impressive win in the TTC Members Class 2 Handicap over 1100 metres in Launceston last night.

It was an impressive win and it gave apprentice David Fisher a double, having notched his first career win aboard Hell Strong.

Both of Fisher’s winners are trained by David and Scott Brunton.

Buzzing Along was one of last season’s better performed three-year-old fillies. She ended her Tasmanian campaign with a game and narrow second to her stablemate Lady Lynette in the weight-for-age Vamos Stakes in Launceston in February.

She ventured to Victoria for two starts but was unable to place.

David Brunton indicated two weeks ago hat he would resume the now four-year-old in the class 2 and that Fisher would ride to take his four-kilogram claim off the big weight she was handicapped to carry (61.5kg).

Buzzing Along began brilliantly and probably too well as it left Fisher with no option but to race at her girth of the leader Little River Girl.

When Fisher put it to Buzzing Along at the top of he home straight she quickly gained the upper hand and went on to defeat Little River Girl comfortably with Beau Vallon a closing third and just in advance of Faith’N’Courage that was caught three-wide the trip.