Campbell and Darmanin team up for double 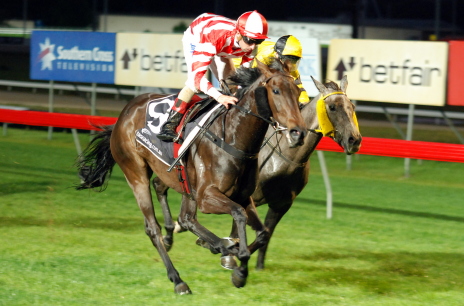 Their first success was well-bred mare Xaartee that scored an impressive win in the opening race (1620m) on the nine-event card and lightly raced mare Rick’s Lady delivered in style in the TG Financial Maiden over 1220m.

.Xaartee went into her race with sound form, having won three starts earlier followed by a luckless fourth in Hobart before finishing runner-up to Tree Bandit in a strong maiden-class one in Launceston.

“This mare gave me a great feel tonight and even though she had he run of the race just behind the leaders she really let down well and no doubt will progress to longer distances,” Darmanin said.

Campbell said Xaartee has rewarded her owners Terry Clayton and Peter Thomas for their patience.

“This mare showed promise as a youngster but she suffered an injury and she was out for a long time,” Campbell said.

“It’s great when owners take your advice and then get rewarded for it down the track,” Campbell said.

Xaartee scored by almost a length from outsider Our Lieveling with Nine Under doing his best work over the concluding stages to finish third.

Rick’s Lady started from a wide gate but that became a blessing as she traveled wide in the best going with cover to the home turn and then let down well to go on and score by almost a length from Zahlee with Gee Gee’s Dash two lengths astern.

“This mare’s previous run was terrific because she was never better than six wide but kept coming in the straight,” Campbell said.

“I’ve got a bit of time for the mare and I reckon she’ll go on and win races,” he said.