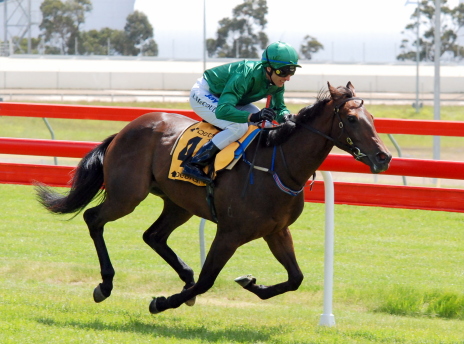 ONE of Tasmania’s best two-year-olds Alfa was honored over 10 yers ago when a feature juvenile race was named in his honour and at The TOTE Racing Centre tonight the original trainer of the star galloper is hoping to win the race named as a tribute to his former stable star.

Campbellprepares the unbeaten Grand Tycoon that has been dominant at all of his three starts and along the way has picked up $28,000 in yearling-sale bonus vouchers for his owners Charlie and Wendy Langmaid.

Despite being trained at Devonport Grand Tycoon has only raced at Tattersall’s Park inHobartwhere he won a maiden 2YO on debut in early November and followed up with a narrow win over Geegees Red Rock in a 2YO Handicap over 900 metres.

At his latest outing he demolished his opposition in the $25,000 Alexandra Plate over 1000 metre defeating the highly promising Triple Bee and Geegees Red Rock, scoring by almost three lengths.

With tonight’s assignment at set weights he will carry 57 kg, the same weight he carried to victory last start with the two fillies, Miss Elsa and One More Red his main dangers and they both will carry 55 kg.

One More Red, prepared by Charlie Goggin and Luella Meaburn, has had one start for a win at Spreyton on Boxing Day in which she appeared to take all day to run the leaders down yet her sectional times were outstanding.

Miss Elsa was third to One More Red that day but she improved to finish second to the highly promising Spinning Jenny in Launceston in the Silver Ingot over 1100 metres two weeks ago.

The state’s leading training combination of David and Scott Brunton will saddle up two first starters Vigilante (Street Boss-Enola Girl) and Foolish Games (Reaan-Elmira) with Foolish Games the best-performed at the trials.