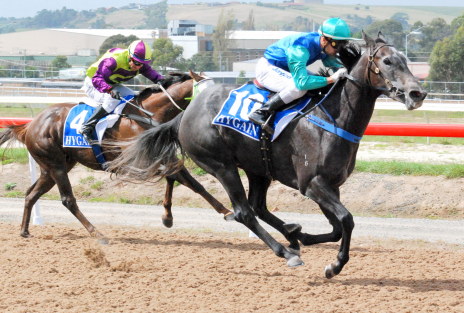 SPREYTON trainer Barry Campbell declared his three-year-old filly Coastal Rose would develop into a handy middle distance performer after she scored an emphatic win in the Examiner Newspaper 3YO and Upward Maiden Plate over 900 metres.

Coastal Rose (Tough Speed-Satin Rose) settled midfield from a good gate and travelled well for in-form jockey Anthony Darmanin who had the filly poised to pounce on the home turn.

The Barry Campbell-trained filly moved alongside the leader Gee Gees Cry Baby half-way up the home straight and put the end result beyond doubt 100 metres from home.

Coastal Rose was having only her third start. She debuted in November last year with a near last effort on her home rack at Spreyton and she resumed with an eye-catching second to the highly promising Black ‘N’ Tough, also on the Tapeta at Devonport, a month ago.

It was the first leg of a race-to-race double for Darmanin who guided the Ray Worbey-trained Underbelly to a stirring win in the Simons Carpet One 3YO and Upwards Maiden Plate over 1150 metres.

It was Underbelly’s second start this preparation and Worbey admitted he only took the five-year-old mare to Spreyton as a travelling companion for Lonaro that represents the stable in a later race on the card.

Listen to what trainer Barry Campbell and jockey Anthony Darmanin had to say about Coastal Rose’s maiden win – click here .