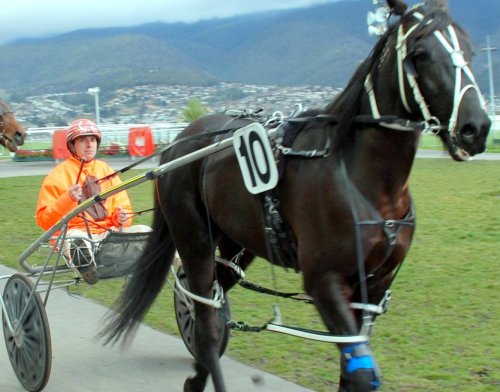 MUCH criticised pacer Cancellara is starting to repay his owner-trainer Ray Brown for keeping up the faith.

Brown’s faith and persistence has paid big dividends, evidenced by Cancellara’s narrow but impressive win at The TOTE Racing Centre in Launceston on Sunday night.

With Brown in the sulky, Cancellara flashed home to grab victory in the shadows of the post from the favourite The Jouster with Anoptomist a close-up third.

Cancellara won a race at MooneeValley as a three-year-old and there were big raps on the gelding but over a year down the track he has won only two more times from 21 outings, including this latest triumph.

But Brown says Cancellara still has a bright future now that he is getting up in class.

“This horse just needs to get his confidence back,” Brown said.

“His biggest problem has been not being able to handle the Hobart track. He goes great in Launceston where he doesn’t have to worry about losing three lengths coming around the last turn like he does in Hobart,” he said.

Brown believes this latest win will not only help boost the horse’s confidence but it also puts the gelding into a higher class.

“The better the race the better he goes.”

“He’s got to have the speed on – that’s why he went so well in Melbourne.”

“I’m sure he’ll get better as he goes up in grade,” Brown said.

Cancellara is raced by Brown in partnership with his friend and long-time stable client Ricky Pullen.