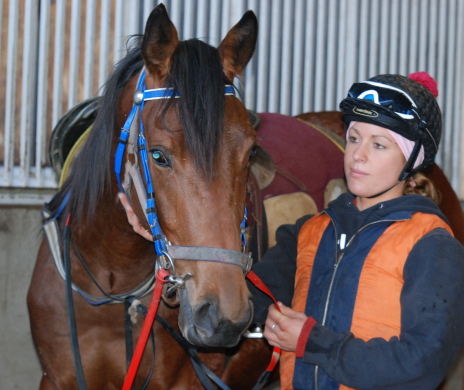 SIGRID “Siggy” Carr has been waiting a long time to become an apprentice jockey and it looks like her dream will be realised before the end of the year.

Car, 24, has been around horses all her life and while she has been riding trackwork for her trainer father Royston Carr for many years it has only been in the past year that she has contemplated carving a career as a jockey.

Carr rode in her first trials at Tattersall’s Park last Tuesday and ended the session with a winner.

She partnered the David and Scott Brunton-trained Lock It In Eddie to victory in the last of 11 trials.

“It was such a buzz winning the trial and I can just imagine what it might be like to ride a race winner,” Carr said.

Once Carr has completed 20 satisfactory trial rides she will be apprenticed to her father who has a strong team in work at the Brighton training complex.

From all accounts her two rides at last Tuesday’s trials were satisfactory.

Her win aboard Lock It In Eddie was good in that she steered the gelding in between runners close to home to get the bob in right on the line.

One of the gelding’s part-owners commented that it was the first time Lock It In Eddie had won either a trial or a race without the aid of blinkers, so Carr must have the magic touch.