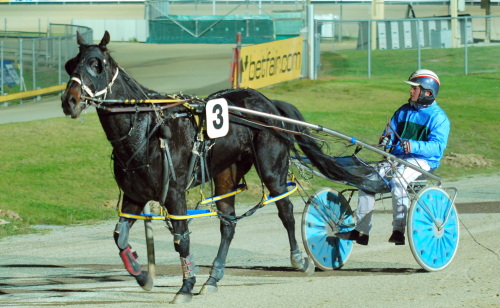 COLEBROOK harness trainer Paul Medhurst has always believed Carrigdhoun was capable of winning races so the gelding’s win at Tattersall’s Park in Hobart on Monday night came as no surprise.

Carrigdhoun (Village Jasper-Glory Lady) came with a late charge to score narrowly and at the juicy price of $20.40.

Medhurst said he thought the gelding could win if the race was run to suit and that eventuated with a solid speed set by the heavily backed Red River Gee Gee that showed excellent gate speed from the pole to hold out River In Blue Jeans that attacked for the lead for the first 300 metres.

That dual allowed driver Gareth Rattray to slot Carrigdhoun in behind the leader from where he travelled well to the home turn.

and Carrigdhoun did the rest by charging home to defeat The Rustler with the winner’s stablemate The Bullionaire a closing third.

Listen to what trainer Paul Medhurst had to say about Carrigdhoun’s first win in the state – click here.