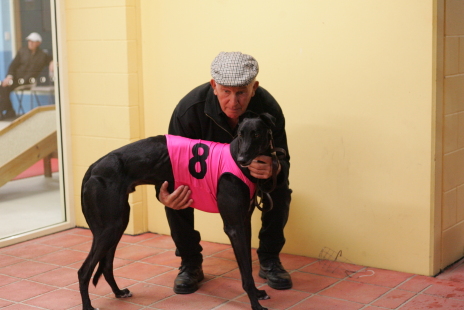 Young pup Cassomac Levi trained at Newnham by Doug Cassidy appears to have a bright future after recording a win at his first start last Friday.

This son of Collide recorded 26.64 winning by 5 ½ lengths and should prove hard to beat from the check.

Hayley’s Reward trained by Sonia Martin and owned by Ricky Ponting appears to be his main opposition while Small Fry off the red looks next best for Laurie Hills.

Times of Grace continues to perform in Launceston recording another terrific win on Monday Night in a scorching 29.75 and deserves a change of luck here.

Last week this son of Collision bombed the start but still ran on for third.

Jumping from the pink tonight he should settle early and be close enough turning for the run home.

Caramel Fudge won well in a good time last start and looks his main opposition while Buckle Up Ray and outsider Genista Flight back from a spell look next best.

Tree Bandit (R10) for Russell Watts looks a super chance in a tough race while the David Crosswell trained Volatile Flame should lead all the way in the last.