Catania and The Iceman steal show in Launecston 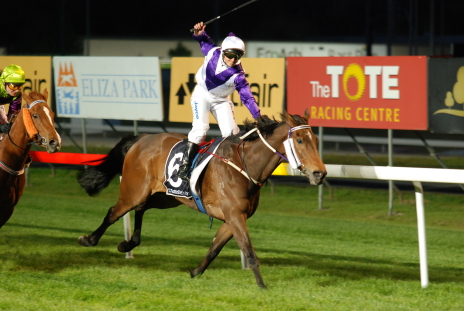 Catania bagged a treble courtesy of wins aboard Can Get Thirsty and Colossus Of Rhodes for Brighton trainer John Luttrell and Status Seeker for her master Tammy Mollross.

The young rider has been back riding for about 18 months but has had limited success but last night she rode like a rider possessed.

With her confidence high, Catania delivered her best performance since she started riding about three years ago.

She began her apprenticeship with Gary White and enjoyed success soon after securing her licence but for a number of reasons she stopped riding and took time off to determine whether or not she really wanted to be a jockey.

Thankfully for the Tasmanian industry the cards fell in favour of her returning to the saddle.

Catania rode a patient but determined race aboard Can Get Thirsty that started the rank outsider at $14 in a small field of five in the Rotary Club of Central Launceston over 2150 metres.

Can Get Thirsty led and despite being headed clearly by Gee Gee’s La Quite in the home straight Luttrell’s gelding found plenty over the concluding stages to fight back and win comfortably.

It was a similar ride aboard Colossus of Rhodes, although Catania had to time her run perfectly on him as he has a tendency to ease up once he hits the front.

But he saved her best ride for last aboard Status Seeker. Catania had he gelding well laced midfield but when she needed to get out and set sail after the leaders she was bailed up behind a wall of horses.

But with her confidence soaring she aimed her charge into a gap turning for home and the gelding barged his way out and produced a powerful finish to score from Naadji and race leader Centenary Diamond.

“The Iceman” Kelvin Sanderson also landed a treble courtesy of wins aboard Integer and Light The Candles for Spreyton trainer Adam Trinder and he guided General Quest to an overdue win for trainer Glenn Stevenson.