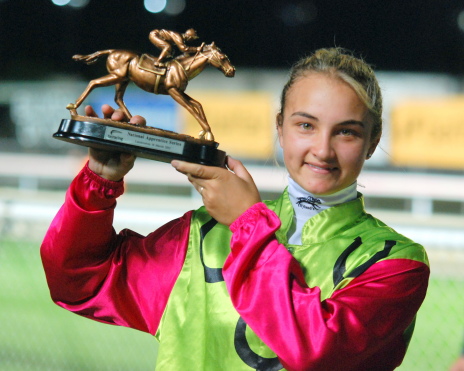 TASMANIAN riders made a clean sweep of the second round of the National Apprentice Series held at The TOTE Racing Centre in Launceston last night.

Comeback apprentice Georgie Catania produced one of the rides of the night to score aboard Heartbreak Lass to give that mare’s trainer Greg Scott his first winner as a thoroughbred trainer.

Catania settled Heartbreak Lass just beyond midfield and waited until the top of the home straight to call on the five-year-old for the supreme effort.

Heartbreak Lass finished powerfully to edge out Hold Onto Your Hat (Bulent Muchu) with another Tasmanian rider Rasit Yetimova a close-up third aboard the Troy Blacker-trained Miswaki Call.

Tasmania’s official representative in the series heat Jacques Luxe finished fourth aboard We Say that is trained by his Tasmanian master Vicki Rhind.

Catania began her riding career apprentice d to Brighton mentor Gary White but after only eight months she decided to take a break from riding.

While contemplating her future in racing she was offered the chance to travel to Melbourne and work as a trackwork rider for top Caulfield trainer Mick Price and that experience helped convince her to make a comeback.

For Scott it was justification for making a decision eight months ago to try his hand at training thoroughbreds.

“This is terrific and while I’ve had a few issued to contend with in the early part of thoroughbred training career I’m pleased this mare has been able to do what I expected tonight,” Scott said.

“I have been working hard with only three thoroughbreds in work and I wouldn’t have been able to get this result if it hadn’t been for the help of fellow harness trainer Adrian Duggan,” he said.

Listen to what Georgie Catania had to say to Peter Staples after her win aboard Heartbreak Lass – click here .