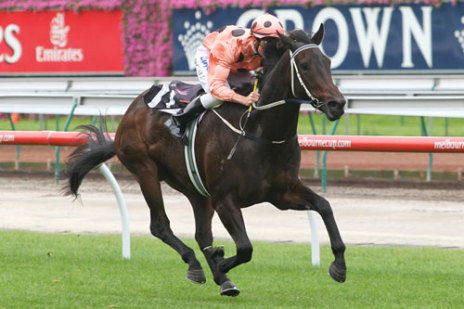 THERE has been great debate amongst racing pundits in recent weeks regarding Black Caviar’s stature in racing ranks with one prominent Sydney scribe expressing his concern that the Peter Moody-trained mare was not yet deserving of champion status.

She is unbeaten from 10 starts and her CV reads better than any other sprinting mare of modern times with this latest victory taking her Group 1 wins to three with four Group twos and a Listed race from her 10 triumphs.

But after Black Caviar’s demolition of a quality field in the Group 1 Newmarket Handicap over 1200m up the straight at Flemington today there can be no doubt that this incredible equine specimen is unquestionable the best sprinter to grace the turf in decades.

Black Caviar was hardly ever out of third gear but she still managed to run the journey in 1m.07.36 which was just 0.02s off the record with her sections showing her might.

With regular rider Luke Nolan aboard she settled in the leading bunch with last season’s Golden Slipper winner Crystal Lily making the pace under a firm hold.

But when Nolan called on Black Caviar to deliver the knockout blow she slipped into another gear and left class gallopers in her wake.

The Newmarket prize money took her career stakes earnings to $2.235 million with more to come – By PETER STAPLES.