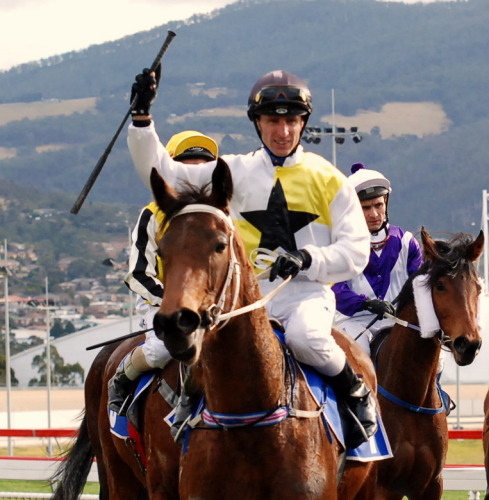 SMART two-year-old filly Cervelo ended her season on a high when she scored an impressive win in the Huon Valley Wine Cellars Handicap over 1100 metres at Tattersall’s Park in Hobart yesterday.

Cervelo (Brendon McCoull) carried top weight of 58kg but made light of her task.

She raced handy to the lead until McCoull called on her to extend and she left her rivals in her wake to go on and score by almost two lengths from Drummond with Nicole’slilmiss over four lengths astern.

The David and Scott Brunton-trained filly was resuming from a spell but a recent trial had her ready to run.

“She is a nice filly and I’m looking forward to her performing well in some nice races next season,’ said co-trainer Scott Brunton.

“I reckon she’ll be aimed at some of the good three-year-old races next season so she’ll go for a break and and be brought back to prepare for the 3YO Cup in Launceston in November,” he said.

Cervelo (Savoire Vivre-Bianchi) had only one start prior for an equally convincing win on the Hobart circuit in March.

One of the owners, Chris Boys, has been working in London for the past two weeks but had to return for business meetings that coincided with his filly’s race return.

“I couldn’t believe my luck when I found out she would be running during my six-day return to Hobart,” Boys said

“I’m really excited about being involved with this filly and hopefully I can get back to see her run again next season.”

“I keep in touch with Tasmanian racing through the Tasracing website but there’s nothing like seeing your horse run live,” he said.

While Cervelo was impressive, there also was a lot to like about the effort of Drummond that did it tough outside of the leader but kept finding in the straight.

The Royston Carr-trained gelding Silent Critic missed a place but was doing his best work over the concluding stages, so he might be better over more ground.