Chassy does her best 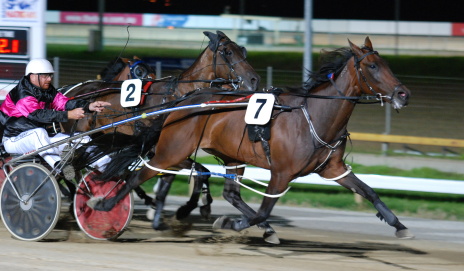 TALENTED trainer-driver Brent Parish has only a couple of horses in work these days and they rarely have the support of the majority of punters.

Such was the case with his underrated mare Chassys Best that scored her first win from 17 starts this season at Tattersall’s Park on Monday night.

Chassys Best started at big odds ($45.60) and understandably so given her form going into the race.

The mare had not won a race in almost a year but probably understandable as Parish has had to deal with a couple of niggling issues that have prevented the mare from performing at her optimum level.

But the six-year-old daughter of Topnotcher-Three Rivers Run has been responding to some chiropractic sessions in recent weeks that helped deliver the desired result.

Parish had Chassy’s Best settled just worse than midfield and she travelled well to the home turn where her trainer-driver called on the mare for the supreme effort.

She responded magnificently and powered home to grab victory in the shadows of the post.

Chassys Best hit the line just over two metres clear of the long odds-on favourite Innasbrook with the race leader Waikoko King just under a metre away third.