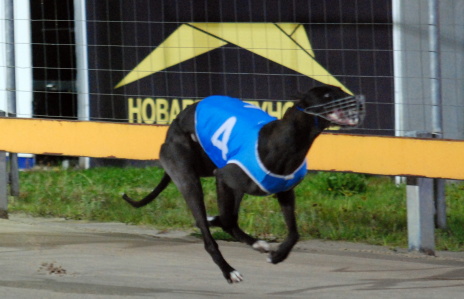 WELL bred bitch Cheergirl delivered a quality performance to notch her first win in a juvenile over 461 metres at Tattersall’s Park in Hobart last Thursday night.

Cheergirl (Premier Fantasy-Flick The Switch) showed great track sense to weave her way through the field      after being slowly away from box four.

The Mick Stringer-trained bitch went into the race with only three runs to her credit with a third on debut the best effort.

But she is obviously a quick learner as evidenced by the way she made her way through the field from an awkward position nearing the home turn.

“She has a few little quirks around the kennel but she is starting to come to terms with racing and I think she showed that tonight,” Gordon said.

“She missed the start a bit and then had a wall in front of her but she eased and baulked to take the run on, the inside when it presented so it was a very encouraging effort.” he said.

Premier Fantasy showed good early speed to vie for the lead to the top turn with Arthur Pines and Rosie Cheeks and they travelled three-abreast to the top turn.

Just when Premier Fantasy had shrugged off the other two, Cheergirl slipped through on the rails and went on to score by just over three lengths from Pretty Fantasy.

It was the first of three winners for Stringer who also prepared New recruit to win the Invitation over 461 metres and Millie Grace that gave her rivals a galloping lesson in a grade four over 461 metres.